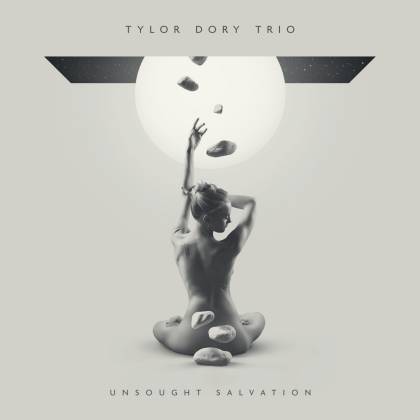 Spare a thought for anyone releasing a new album at the end of December. Inevitably lost among the deranged whirlwind of Christmas and almost guaranteed to be forgotten by the New Year, these records are the unthinking lemmings of the music biz calendar. Fortunately, the way that people consume music these days does give the likes of TYLOR DORY TRIO a fighting chance, and "Unsought Salvation" plainly deserves to hang around online until everyone realizes how good it is.

Fans of modern prog and not-so-modern progressive metal are well served these days, but even within ostensibly open-minded creative circles, prog's strongest tendency is to endlessly repeat other people's once revolutionary ideas. TYLOR DORY TRIO are not exactly operating in the depths of the avant-garde, but there's a subtle freshness to the trio's sound and an underlying exuberance that seems to absolutely guarantee an even brighter future.

Self-financed and self-released, "Unsought Salvation" starts with "The Righteous and the Rest" via a juddering riff in 7/8, before Dory's voice — breathy and rasping, but with acres of soul — takes center stage for the mellowest of melodic buildups. It doesn't take a genius to spot the influence of RUSH, DREAM THEATER, TESSERACT and all the usual prog metal culprits in the TDTformula, but a combination of Dory's distinctive wail and a smattering of jazz chords takes the song somewhere else entirely. Similarly, "Comatose" will tick plenty of boxes for admirers of the post-djent hordes, but where many of their potential peers seem to create patchworks of riffs and hooks, this feels crafted and meticulous, with echoes of STEELY DAN's pristine perfection in its most elegant, restrained moments. When Dory turns feral, with hellish growls and screams, the atmosphere becomes darker and the band's metallic instincts kick in over another angular groove. Elsewhere, "The Fallen Man" is a splurge of vocal harmonies, muscular disco beats and spiraling solos; "Dying Light" takes an unsettled meander across psychedelic meadows, with sparkly acoustic guitars and an arena-sized chorus. Best of all, epic finale "Cenotaph" shows what happens when TYLOR DORY TRIO let their best ideas breathe: it flies by in what seems like a fraction of its wayward 14 minutes, from a tense, loping start to a warped death metal midsection and on, to a breathless climax and blissful but bruised epilogue.

At least one point should really be deducted for picking such a terrible release date, but it's Christmas as I write this, so this gets what it deserves. A brilliant, promise-laden debut that modern prog fans should regard as mandatory.