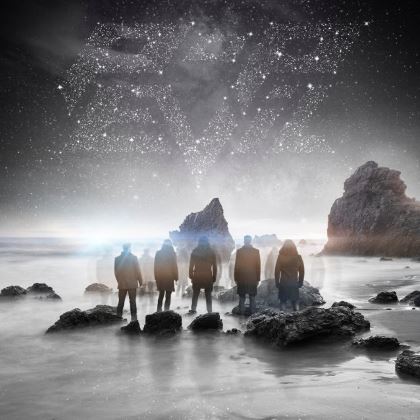 Only in America: The mayor of Grand Rapids, Michigan, George Hartwell, is a rocker. Hartwell recently appeared on Michigan television station Fox 17 during a news broadcast and declared August 21, 2015 "Pop Evil Day", this being the release date of the hard rock superstars' fifth album, "Up". You can't get better hype than that, folks.

Whether you love 'em like Hartwell does or you don't, POP EVIL are on a roll with their third album within a four-year block. As the saying goes, strike while the iron is hot. The band does just that on "Up", an album that will rock the socks (and other clothes, no doubt) off their fans. For anyone else, well, "Up" is what it is, but a few pretty good cuts do emerge from the cookie-cutter AOR ditties that have vaulted POP EVIL into favor with mainstream American and worldwide audiences.

To the good, "Core", "In Disarray", "Vendetta" and "Lux" rock, particularly "In Disarray", which has a terrific set of riffs and a banging groove going for it, treading close to L.A. sleaze rawk minus the sleaze. "Lux" borders on cheesy in spots, but the choruses have an undeniable kick. It's predictable where "Vendetta" is heading after leading off with a thrashing intro, but at least Nick Fuelling, Dave Grahs and Matt DiRito dump out some sicko riffs on the verses.

Playing the "pop" element of their moniker like a royal flush ("flush" holding a different connotation with this band for some) on "Footsteps", "Take it All", "If Only for Now", "Ghost of Muskegon" plus the grunge-plugging (and kinda cool) "Ways to Get High", POP EVIL know exactly tickles their listeners' fancies. Leigh Kakaty is hardly above yapping his higher octaves and ring leading "ooh-whoo-ooh-wooh" chants from his band, while programming and drum machines elbow their way alongside Joshua "Chachi Riot" Marunde's energetic tom battering. It's fan-pleasing audile cotton candy.

Of course, "Up" is wont to push a ballad or two, those being reserved for the end of the album with the attractive "Seattle Rain" and the slightly edgier "Til Kingdom Come". As far as commercial rock albums go, "Up" is better than the average, even if the album's most average tracks are enough to part with. POP EVIL is well-entertaining for the audience they cater to and accordingly, they're tighter than an Ashley Stopper Knot.

Now if Yorkshire, England stages an "Asking Alexandria Day," then we've all had it.