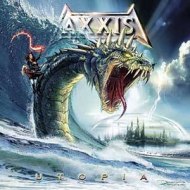 Do the Germans know power metal or what? It never ceases to amaze me the traditional/power metal talent originating in that country, including acts as diverse as HELLOWEEN, EDGUY, BRAINSTORM, RAGE, GAMMA RAY, PRIMAL FEAR, GRAVE DIGGER, and BLIND GUARDIAN. The common denominator? Big, fist-pumping hooks that burn through your brain like a potent dose of LSD, sans the bad trips. That same quality is what makes the music of long running (since 1988) trad/power act AXXIS such a delicious treat. It is a veritable volcanic eruption of sing-along anthems with driving riffs and potent rhythms, from the power metal explosion of the title track all the way to the equally hard charging, keyboard scintillated album closer "Underworld".

I listen to "Utopia" and I think of Atlanta's annual ProgPower festival, as the quality controlled songs and tight musicianship are representative of the kind of music that translates so well on that hallowed stage. Everything from Bernhard Weiss' likeable mid-range singing to Harry Oellers' sparkling keyboards to the crushing chords of guitarist Marco Wriedt just beg for a sold out venue with an impeccable sound system.

"Utopia" does provide proof positive that there is nothing new under the sun and AXXIS makes no attempt to hide what is a tried and true formula. It is also a formula that is beloved by many and the band has a knack for delivering it with gusto. There are just so many opportunities here to revel in the addictive melodies, whether it is "Last Man on Earth", "Fass Mich An" (sung in German),or "Sarah Wanna Die". A rolling toe-tapper like "The Monsters Crawl" might seem corny or cliché in the collective hands of a lesser band, but is a fun-filled blast when AXXIS performs it, while a ballad called "My Fathers' Eyes" with its pure pop chorus is as endearing as it is catchy.

Hell, there isn't a song on here that doesn't serve the dual purpose of rocking balls off — save for the ballad and intro "Journey to Utopia" in which cases balls remain firmly attached — and leaving one shouting right along, way out of key or otherwise. Unless you suffer from a critical snobbery that prohibits you from enjoying unoriginal meat and potatoes power metal or just plain hate the style, you'll walk out the "Utopia" listening session with a shit-eating grin on your face and a brighter outlook on life. How bad can that be?