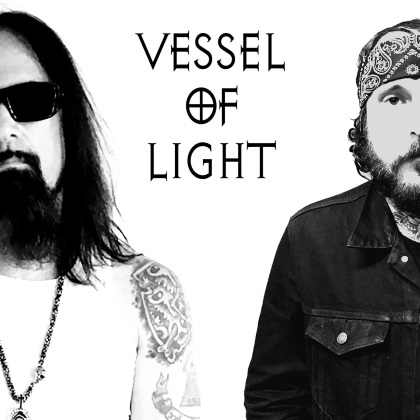 It's been a while since we've seen Dan Lorenzo from HADES, NON-FICTION and THE CURSED, and while the metal underground continues to wallow in morbid fascination with anything containing a sludgy, doomy palette to it, he emerges with a timely new project. Bringing guitars, bass and songwriting to the table, Lorenzo is partnered with Nathan Opposition of ANCIENT VVISDOM, who fields VESSEL OF LIGHT's drums, vocals and lyrics. The duo issues a series of doom-based songs articulating the horrors of addiction, while frequently using metaphoric guns to the head as self-inflicted death sentence caveats. For only two guys, they muster a lot of mileage together, particularly in the EP's sharp production.

Dan Lorenzo's maudlin guitar line opening "Where My Garden Grows" serves as the blueprint melody to the skulking doom stomper "Dead Flesh and Bone". TYPE O NEGATIVE being the immediate vibe you catch with "Dead Flesh and Bone", Nathan Opposition takes his cue with a loose Peter Steele impression. He doesn't so much drop into the late Steele's dense projections, but it's the morose, sliding cadence of Steele he seeks to capture. Thus, "Dead Flesh and Bone" works well enough due to the grumbling chords Dan Lorenzo globs into it, and they grow even nastier on "Meant to Be". Staying in the key of TYPE O NEGATIVE, Nathan Opposition's lumbering rhythm and scraggly chops drop severity to the track. His jockeyed ranges are spooled together quite well, particularly toward the end of the song, as are Lorenzo's stacked tracks, the bass lines buzzing at amp's strain.

"Descend into Death" is where this EP picks up a little steam, knocking somewhere between THE OBSESSED and ALICE IN CHAINS. You've heard these riffs everywhere in metal, but they're shoved proficiently and well-timed to Nathan Opposition's snappy strikes. His vocals are at their most appealing here, swimming in a goth channel while chafing some gory snarls through the writhing choruses.

"Living Dead to the World" is an appealing doom homage to everyone from BLACK SABBATH to WITCHFINDER GENERAL to SAINT VITUS and yet, Nathan Opposition's vocals play the song a trick. One would find his acidy and aloof slogging more suited to a GREEN RIVER grunge cut, and yet they are weirdly welcome here. While hanging in this verve, Dan Lorenzo drops a fuzzy bass knock and some malevolent guitar notes into the puttering "Vessel of Light", a song that rings like a gnarly bro-down between MUDHONEY and Scott"Wino"Weinrich.

Where VESSEL OF LIGHT succeeds best is when the band tinkers with its foundational doom and stoner riffs and tries to push things forward. Otherwise, this would be a mere exercise to entertain two dudes' chum-speckled whims. There's lyrical intensity yielding caution everywhere and this EP contains some of the heaviest tones Dan Lorenzo has submerged himself in. He has the perfect playmate here as VESSEL OF LIGHT's moniker serves as a symbolic slash of hope through its foggy morass.