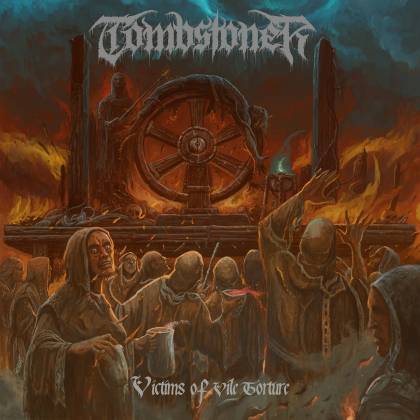 The death metal scene is so grotesquely overpopulated these days (and not necessarily in a bad way!) that it takes a band of some distinction to stand alone, at least in musical terms. Not that TOMBSTONER are particularly radical, at least compared to some of the mind-bending things that people have done with the genre recently, but "Victims of Vile Torture" crackles with a lethal disregard for toeing any particular subgenre line. With vast quantities of hardcore's pit-inciting groove and some unashamedly Neanderthal riffing, this Staten Island crew are audibly creating death metal for the people. Put more simply: this shit was purposefully designed to cause absolute carnage and reduce venues to piles of smoking rubble. An honorable endeavor, let's face it.

Playing straight-ahead death metal is by no means a low-risk task, but TOMBSTONER side-step all the usual gaping manholes, eschewing cliches and well-worn tropes in favor of a moderately but unmistakably subversive hybrid of just about everything under the genre's traditional wing. That means that songs like "Sledgehammer" and "Breaking Point" slam and pummel with all the snarling brio of early SUFFOCATION, but with the refined hookiness of ENTOMBED, the land-levelling, bellicose grind of BOLT THROWER and BENEDICTION and several extra doses of gnarly thrash and, yes, bug-eyed and belligerent hardcore. Although the guitar tones and delivery are firmly rooted in the foul aggression of the underground, TOMBSTONER have songwriting chops and a collective ear for the kind of repeated riffs and refrains that start riots. As a result, something like the deathly hate-swarm of "Grave Dancer" is impressively hard to pigeonhole. It's extreme metal, and familiar in almost every respect, but this band have their own unique, very nearly out-of-control vibe. "Frozen in Fear", another heads-down barrage of stab 'n' slash death-thrash, emanates discernible echoes of CARCASS and UNLEASHED, but still sounds fresh and priapic with destructive intent.

Death metal infiltrated the mainstream decades ago, but the genre still needs fresh blood to provide frequent reminders of what the real thing sounds like. Fueled by the kind of rabid enthusiasm that often separates the heavyweights from the part-timers, TOMBSTONER's debut hits the spot with such alarming frequency that you would have to be deaf, dead or terminally stupid not to recognize that this truly slays.