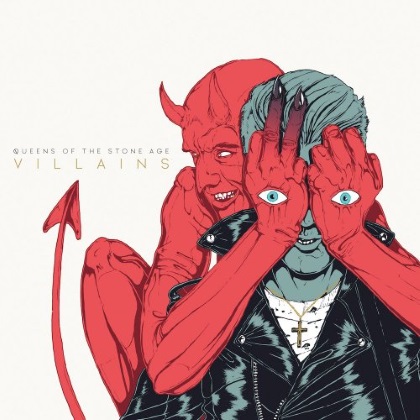 QUEENS OF THE STONE AGE

With ""Villains", QUEENS OF THE STONE AGE has put out its best album in years, and one of the best of its career. It is informed by a sense of groove and swing unlike any other in the band's catalogue. Producer extraordinaire Mark Ronson—who has helmed hit albums by the likes of BRUNO MARS, PAUL MCCARTNEY, DURAN DURAN, ADELE and LADY GAGA—is presumably a key factor in the improved product that remains true to the freeform, borderless rock 'n' roll the band is known for. "Villains" is accessible and catchy yet replete with the gripping power that reminds us of frontman Josh Homme's early days with desert doom dealers KYUSS, at least in terms of spirit, if nothing else.

Ronson's undeniable forte—leveraging the timeless power and sound of seventies and eighties popular music into contemporary aesthetics—clearly helped shape and give form to Homme's newest vision. The frontman's own wide-sprawling collaborative efforts have always assisted him in expanding his musical reach within the context of QOTSA and beyond. It's likely that what he learned or grew into with his recent collaborations with LADY GAGA and IGGY POP has bled directly into "Villains".

New wave bleeps and bloops permeate the release, which is essentially a pop rock record that pulls from the pockets of krautrock, psychedelic rock, new wave and synth-pop. It's sometimes quite busy, but always clear and concise in vision and delivery. "Villains" is avant-garde without betraying the band's strength and inclination for delivering hook-laden rock anthems.

Considering that six of the nine songs are longer than five minutes, and that only one song on the release is less than four minutes long, it is safe to say that, while Homme may have had pop sensibilities in mind, he didn't design the album as a cash grab. It's creatively rich, and impressively, the songs don't feel excessively long. Every piece of the puzzle seems to have a sense of purpose.

On classic QOTSA albums like the eponymously entitled debut, "Rated X" and "Songs for the Deaf", there was a sense of irony where Homme was likened to a jokester or lover boy on the block flipping off the slew of late nineties, early aughts rockers who were either steeped in post-Nirvana self-loathing or po-faced nu-metal angst. And sure, QOTSA's desire to toy with rock conventions will likely always remain, but with a track like "Hideaway", Homme has never sounded as sincere vocally in a way that oftentimes assumes a flair reminiscent of David Bowie.

The music is so strong on "Villains" that it takes a moment to realize the absence of the bombastic rhythm and hard-hitting guitar work that characterized the veritable classics prevalent on the group's trio of initial releases. Sure, that energy and power finds its way into the album, even with dance-floor friendly cuts "Feet Don't Fail Me" and "Domesticated Animals", but the influence is subtle and the crunch is dialed back. The pedal-to-the-metal, raucous rock riffing of yore only overtly surfaces toward the end of the album in the final breaths of the groovy rocker "The Evil Has Landed". It serves as a welcome reminder of where QOTSA comes from, and just how far the band has successfully traveled into new terrain.