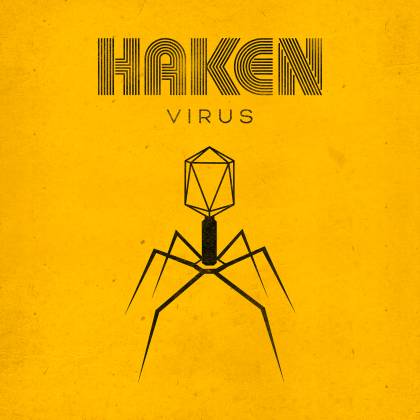 Firstly, well done for picking a very pertinent title. Secondly, we should probably congratulate HAKEN for making exactly the kind of absorbing, detailed and substantial record that most of us now have more than enough time to digest. The sequel to 2018's fiery but finessed "Vector", the British prog metal crew's sixth full-length starts with a haughty flourish, as a furious, staccato metal riff slams home their technical abilities and their heaviness credentials. But while they are as precise and clinical as any of their peers, HAKEN's melodic ingenuity and gleeful subversion of prog norms ensures that opener "Prosthetic" tears by in what seems like half of its six minutes.

As with its predecessor, this is an album that goes for the jugular, with HAKEN's heavier tendencies at the forefront (almost) throughout, but with so much gleeful prog indulgence and melodic trickery, more conservative listeners may find themselves feeling a little bewildered. The production is crisp and crushing, but nuanced and dynamic when it needs to be. Vocalist Ross Jennings plays an integral part; his off-kilter harmonies and lightly worn power providing the complex likes of "Invasion" and "The Strain" with welcome warmth and a dash of glowering intensity.

It's plainly more streamlined and focused than earlier records, but "Virus" still demonstrates how musically restless and endlessly inquisitive this band is. That lust for the new comes to a climax of mind-bending invention on the five-part, 17-minute "Messiah Complex". Easily the most dazzling of HAKEN's expansive epics to date, it harkens back to the structural sprawl of "Cockroach King" (from 2013's breakthrough opus "The Mountain") but with vastly more post-djent crunch and mad ideas. There was a time when many regarded the band as the UK's answer to DREAM THEATER, and while that band's influence on everything the Brits have done is undeniable, "Messiah Complex" also points to a compositional kinship with BETWEEN THE BURIED AND ME and DEVIN TOWNSEND, such is the mischievousness and, on occasional, brutality on display. Blastbeats, sudden bursts of videogame scree, neck-snapping detours and spellbinding, seamless transitions — it's all here, folks. HAKEN sound thrilled by their own brilliance, too. Whether flexing every available muscle on the 10-minute magic-carpet ride of "Carousel" or switching into blissfully restrained mode for the bittersweet drift of "Canary Yellow" or wistful closer "Only Stars", they do it all with authority and verve.

A riotous collision between the cerebral and the primal, "Virus" never forgets to deliver big melodic payoffs along the way. In truth, there are times when it sounds like HAKEN are the band that has everything. How generous of them to share it with the rest of us.