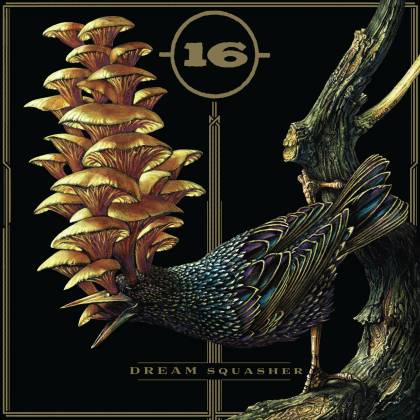 Calfornia's -(16)- have been clawing their way through the swamps of sludge for nearly 30 years. The roots of the band reach back to 1993, the same year that they released their debut album "Curves That Kick" on Bacteria Sour, the indy label owned by none other than Pushead. On the other side of the country, the Louisiana-based progenitors of sludge, bands like ACID BATH, CROWBAR and EYEHATEGOD, gained greater notoriety and name recognition. Perhaps -(16)- marched through the marsh in the shadows of obscurity due to their geographical divide from that popular scene? Or maybe the ball simply didn't bounce in their favor in the same way? Whatever the case may be, -(16)- is rightfully revered as being one of the seminal bands of sludge metal. Four years have passed since 2016's excellent "Lifespan of a Moth", And their latest banger, "Dream Squasher", is a thoroughly enjoyable slab of sonic misery and madness.

"Dream Squasher" is a fine distillation of the act's strong points. The beefy and loaded rhythm section continues to underpin volcanic riffing and guitar work that's embossed in soulful, Southern-sounding swagger. The major deviation this time around is in the vocal department. The robust, caustic screaming of founding member Cris Jerue has left the building. Bobby Ferry, another founding member, has set down his guitar to stand behind the mic stand. Ferry had big shoes to fill, but his big voice does a fine job here.

The Californian's savage intent is clear, and the onslaught is pressing and overflowing from the get-go. Opening number "Candy in Spanish" is a bare-knuckled fight thinly veiled as song. "Me and the Dog Die Together" follows up with a faster delivery of the same grimy malevolence that has always infested the band's heart. Later, "Acid Tongue" proves to be an exemplary display of the sludge metal prototype because of the almost tangible, filthy energy that oozes forth with a snail's pace delivery.

"Dream Squasher" isn't simply meat 'n' potatoes sludge. There are dynamics and diversity by way of the melodic vocals and seventies rock organ parts of "Sadlands". Elsewhere, a tasteful harmonica contribution from Justin Norton augments the sleazy groove of "Agora (Killed by a Mountain Lion)". From front-to-back, "Dream Squasher" finds -(16)- on top of their game, providing a soundtrack for the downtrodden during this world-changing period of pandemic and social strife.