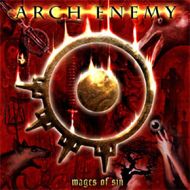 While credit must go out to the ARCH ENEMY boys for having the conviction to recruit a female vocalist in the face of what they knew was going to intense scrutiny following the departure the group's former frontman, the popular Johan Liiva, new singer Angela Gossow's Chuck Schuldiner-meets-Jeff Walker vocals are actually one of the least interesting and colorful aspects of ARCH ENEMY's latest effort, which easily stands as the band's finest work to date.

Much like 1999's Burning Bridges, Wages Of Sin is an powerful barrage of complex riffing that alternates between the blindingly brutal and the stunningly melodic, all the while maintaining a level of intensity that is rarely heard on present-day metal recordings. The musicianship, as usual, is impeccable, with the Amott brothers proving once again that they are the masters of their craft, with the bulk of their guitar work owing as much death metal overtones as they appear to be derived from a more traditional hard rock approach, particularly in the song arrangements, which rarely deviate from the conventional.

Mixed by the in-demand Andy Sneap, Wages Of Sin features by far and away the most impressive production job out of all the ARCH ENEMY albums, with the thick, crushingly heavy guitars and thundering drums perfectly complementing the technical-yet-brutal nature of the band's music. Even when Gossow appears to be going through the motions and delivering standard death metal-style vocals that we've heard thousands of times before, the album's polished-yet-powerful sound and the band's extraordinary instrumental performance is sufficient to lift Wages Of Sin way above the rest of the pack, in the process cementing ARCH ENEMY's place as one of the most exciting metal bands around.