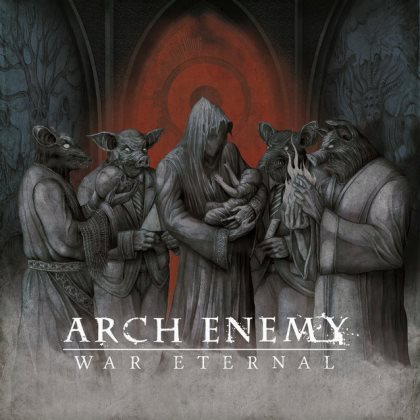 The news of Angela Gossow stepping down as the front of ARCH ENEMY is still fresh as the band launches their latest album, "War Eternal". The new record features THE AGONIST's Alissa White-Gluz on the mike and former ARSIS guitarist Nick Cordle, who gets his first album representation following the 2012 departure of Christopher Amott.

Change often sucks, but hardly in this case. The new blood in ARCH ENEMY has propagated a tremendous creative spark in Michael Amott. Simply put, "War Eternal" is the best ARCH ENEMY album in years. Though Angela Gossow held her post with honor, the songwriting under her tenure fell into a script that's observed on occasion here, but stepped well beyond.

"War Eternal" captures immediate attention with an overture opening featuring harpsichord and choral lines, "Tempore Nihil Sanat (Prelude in F Minor)" before ripping straight into "Never Forgive, Never Forget". The latter yields the same structuring as most ARCH ENEMY songs during the Gossow years with bombastic thrash-grind lines melded with modified slowdowns. Overall, the song is a scorcher and it comes with guitar solos that are dealt at a zillion notes they're worth backing up.

Afterwards, the title track jumps in with an excellent shredded intro and retains a harmonious curve all the way through its mid-tempo stamp. This and the gloriously anthemic "You Will Know My Name" are the closest "War Eternal" get to accessible and the strident focus of the band puts these songs at peaks of near-perfection, once again bringing active, detailed solo sections full of jerked strings and fret dances. The solo on "War Eternal" needs to be shaved by about ten seconds, but otherwise, that track is one of the most affecting tunes ARCH ENEMY's written in some time.

"As the Pages Burn" is completely savage on the verses, but the stepped-back choruses that make an attempt at neoclassical-based melody does the headstrong thrash a slight disservice. Still, the song's a cooker. Speaking of neoclassical, Michael Amott and Nick Cordle lead and fill the steady crusher "No More Regrets" with scales galore and the fret garnishments assume a stately flair beyond the song's gruesome double hammer and fierce breakdown. By this point, it's evident Michael Amott and ARCH ENEMY mean to outdo themselves on this album.

The brief guitar interlude, "Graveyard of Dreams", is a nice set-up for the heavy thrust of "Stolen Life", which the shredding lines and Alissa White-Gluz's spit-flung delivery keep the energy level of the album from faltering. The lullaby opening to the massive "Time is Black" is the perfect opener as the song rolls through a symbiosis of classical lines and progression that jack up in both intensity and elegance.

Suffice it to say, the concentration upon Bach and Mozart behind Michael Amott, Nick Cordle and Sharlee D'Angelo's intricate lines becomes a theme on "War Eternal" and the method elevates the band beyond their powers. Once more incorporating harpsichord and symphonic strings for the intro and the fills of the headbanging groove on "Avalanche", the opportunity for auxiliary grace is capitalized intuitively.

The band's tireless performance on "War Eternal" is comparable to a veteran baseball team with a powerful batting lineup giving a new pitcher a seven run lead to break in with. Blue-coiffed Alissa White-Gluz can rip esophagi with them best of them and she's a natural fit for ARCH ENEMY. She possesses excellent pentameter even in ralphing mode and she sounds like a demoniac on "As the Pages Burn". It doesn't hurt to have her predecessor looming in the background as the band's new manager. Gossow must be feeling proud, if bittersweet that ARCH ENEMY hits a higher level of craft on "War Eternal" than they have in a long time. There are transitional moments in a band, but this is a veritable catharsis.