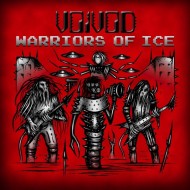 The sound of VOIVOD is as distinctive today as it was 25 years ago. That's what happens when the only item left behind after VOIVOD arrived from outer space onto sovereign Canadian land and turned metal world upside down was a broken and battered mold. Check out the 15-track set recorded live at Montreal's Club Soda in December 2009 and what you hear is not a cobbled together lineup of aging metal heads squeezing the last few drops from a tattered rag of past glories. Rather it is the sound of the three remaining original members — Denis "Snake" Belanger (vocals),Michel "Away" Langevin (drums),and Jean-Yves "Blacky" Theriault — and new guitarist Daniel "Chewy" Mongrain (ex-MARTYR) raging away with boundless energy in performance of the kind surgically precise, yet shape-shifting style of tech-tinged bizaro-thrash for which the lordly innovators are known.

Any way you examine "Warriors of Ice" it ends up an excellent live album, but not just because of spot-on individual performances, unit cohesion, and a song selection that features a heavy dose of cuts from the first six albums. Oh sure, one cannot shake a stake at the unearthly rumble 'n crack of an Away/Blacky rhythm-section-on-wheels, Snake's typically short-of-sane organized meandering, and a heroic guitar performance that turns an impossible situation into three-quarters Piggy guitar clinic and one-quarter Chewy acrobatics. And no long-time fan could put up a tenable argument over a set list that includes two tracks from "War and Pain" (well ok, the inclusion of "Blower" would have killed),one from "Rrröööaaarrr", three from "Killing Technology", two from "Dimension Hatröss", three from "Nothingface" (including a stunning encore of PINK FLOYD's "Astronomy Domine"),and two from "Angel Rat". You want chills? Listen to the quartet ascend to the mountaintop right off the bat with "Voivod" or bend brains with "Ravenous Medicine". Don't even bother debating the inclusion of only two cuts from the band's third decade, both from 2009's "Infini". Does it really matter?

But what sets "Warriors of Ice" (a song title from "War and Pain", by the way) so far apart from the standard live collection is the manner in which that unmistakable VOIVOD aura and appealingly strange energy is captured — helped along by co-producer Glen Robinson (of "Nothingface" fame) — on the disc. "Warriors of Ice" works on several levels. It is a grand tribute to piggy (Chewy plays his guts out),a typically VOIVOD-ian live experience where individual tracks morph into a transcendent musical phenomenon (sorry, it's difficult to explain),and as a perfect introduction for the interested metal fan that doesn't know where to begin. It is not cliché in the least to say that Piggy would be proud of "Warriors of Ice". VOIVOD still makes the magic happen.