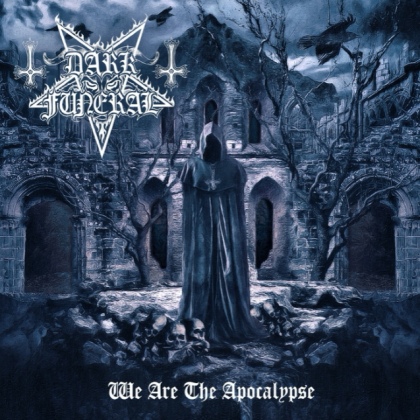 We Are The Apocalypse

Black metal has undergone so many transformations and mutations over the last few decades that it is sometimes easy to overlook the simple thrill of bands like DARK FUNERAL. Always popular but never quite as critically lauded as some of their less direct contemporaries, the Swedes deal in big, brash and bombastic extremity that is never afraid to exert maximum heavy metal power. Consequently, nobody is going to be particularly surprised by "We Are The Apocalypse", at least in terms of its creators' overall approach. But DARK FUNERAL are so ridiculously good at this stuff — and Lord Ahriman is such an underrated but eerily consistent songwriter — that the fact that these songs are simply bigger and better interpretations of the same grimly brutal formula feels more like a selling point than a drawback.

Owners of exposed jugulars will rue their complacency when this album kicks off. "Nightfall" is the perfect opener: insanely fast and furious, it begins as an obscene, obsidian blastbeat tirade before erupting into a giant chorus, ripe for inciting a riotous singalong. And therein lies the key to DARK FUNERAL's greatness, particularly at this point in their career. This is remorselessly extreme and black-hearted music, but with an unwavering connection to the art of memorable heavy metal songwriting. "Let The Devil In" makes the same point with equal intensity. Here, vocalist Heljarmadr's rancid roar and venomous lyrics are crystal clear, and the riffs underpinning them strike a beautiful balance between discordant filth and triumphant, metallic pomp. Meanwhile, "When Our Vengeance Is Done" is so unpretentiously vicious and evil that it could be an outtake from the Swedish veterans' debut album, "The Secret of the Black Arts", from 26 years ago, albeit with twice the sonic power and sharper hooks.

As with 2016's widely lauded "Where Shadows Forever Reign", "We Are The Apocalypse"does feature a tune or two that dares to stray from the beaten, bloody track. "When I'm Gone" fits the bill here, with its ambling, tribal gait and hazy shades of post-metal, while "Leviathan" weaves arcane threats and moments of eerie restraint into a taut framework of mid-paced menace and neck-snapping blasts. There are grim depths to be explored, or you can just bang your head until you puke through your eye sockets, particularly during the closing title track, which is nothing short of berserk. Either way, DARK FUNERAL's seventh full-length album hits the infernal nail firmly on the head and these are some of the best songs they have ever recorded. A simple thrill, but a giant, shudder-inducing thrill nonetheless.