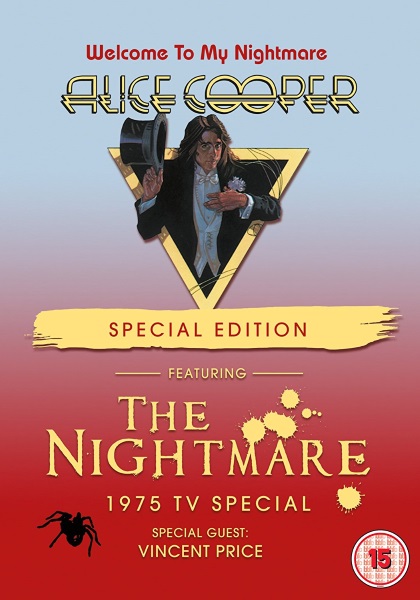 Welcome To My Nightmare

In 1975, ALICE COOPER, along with his innovative manager, Shep Gordon, decided it was time to use the momentum and attention generated in the previous six or so years and shift everything to a higher gear. Alienating some of his long-time fans, he disbanded the groupALICE COOPER and literally becameALICE COOPER by legally changing his name. The next step was recording the larger-than-life concept album "Welcome To My Nightmare" in Toronto, Canada, which featured among others, guitarists Dick Wagner and Steve Hunter, both of whom had appeared on previous AC albums. The rhythm section was mostly supplied by Prakash John on bass and Pentti"Whitey"Glan on drums, both Canadian residents at the time. John and Glan had both previously been in a Canadian band called BUSH, no relation to today's band, of which two members went on to join the post-Joe Walsh version of JAMES GANG. All four of these musicians had worked with Nightmare producer Bob Ezrin before with Lou Reed.

A few weeks after the March release, ABC's worldwide "In Concert" presented the ambitious television special "The Nightmare" to American viewers. Horror movie icon and Hollywood Squares regular Vincent Price—who at the time was concentrating on voiceover work, and had contributed a short narration on "Nightmare"—now was featured in an expanded co-starring role as "The Spirit of the Nightmare." Price's creepy presence is a central factor in the special, and his extra narrative includes some medical advice: "Nightmares aren't from indigestion or tension or discomfort. They come from the blackness of your mind."Price also conducts a short lesson for ALICE's benefit on different species of spiders.

The other dominating element on "The Nightmare"—released here for the first time on DVD—as well as the live film "Welcome To My Nightmare", is the inclusion of dancers choreographed by David Winters, who had gained fame in the movie version of "West Side Story". Rock music fans in 1975 were probably not enthusiastic about this showbizzy intrusion at the time, but looking back, it's quite impressive. They appear early, in the title track, grotesque denizens occupying the blackness of Alice's mind, in slow motion and freeze frame sequences. ALICE dances along with top-hatted skeletons, prodded along by the jazzy hi-hat opening of "Some Folks". The dancers are the most effective on "Only Women Bleed" as they weave in and out with shiny mannequins, and this particular "Cold Ethyl" is smokin' HOT!

All the songs from "Welcome To My Nightmare" are used—album versions with subtle edits. "Ballad of Dwight Fry", from 1971's "Love It To Death", is added, and, thematically, fits in very well. It was all in good fun, of course, and ABC-TV deserves credit for taking the chance. ALICE had stirred up controversy when he appeared on the debut episode of "In Concert" years earlier.

The concert film "Welcome To My Nightmare", from London in September, 1975 and previously available on DVD, was less than a smashing success in 1976 when it was first released. However, it stands as a defining document of the massive "Welcome To My Nightmare" tour that lasted two years. The band consisted of the four main musicians mentioned above and Jozef Chirowski on keyboards and vocals.

In an opening scene, ALICE rises from sleep to begin the nightmare—ALICE's sleepwear being a white leotard with a visible genitilia bump. The dancers from the TV special are back as well. They're kept in a white dumpster-stage left-until they are needed. The set list consists of most of "Nightmare" plus "No More Mister Nice Guy", "I'm Eighteen", "Billion Dollar Babies" and "School's Out". A lot of the dancing and visuals are parallel with "The Nightmare" and includes the addition of a special screen where ALICE and the dancers can appear to go in and out of a projected scene.

The band—initially all in black tophats—gets a few moments in the spotlight during "Devil's Food" with Wagner and Hunter competing in a guitar duel wearing black capes after a giant spider web rises from the stage. After an odd edit and Vincent Price's recorded intro, "Black Widow" produces more maniacal guitar soloing.

The film ends in a less macabre manner: "Escape" and "School's Out" are followed by "Department of Youth", which is extended to allow solos from all the band members. There are edits towards the end that cut into the proceedings with comments from fans in front of the venue, but these minor interruptions are forgiven, now, four decades after the fact. There's an alternate version of "Only Women Bleed", which plays out over the closing credits.

The sound and picture quality are good considering the archival sources, and both offerings are in 4:3 Screen Format. The "Welcome To My Nightmare" concert is in stereo, while "The Nightmare" TV special is in mono, and the DVD also comes with a 10-page color booklet.