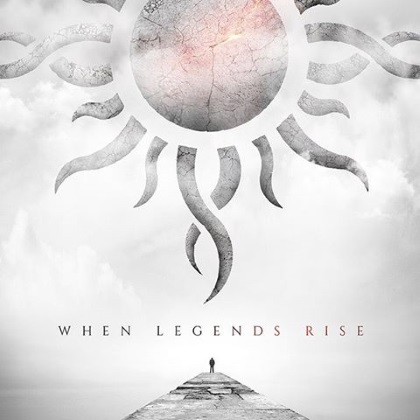 GODSMACK has been slugging away for a couple of decades and with great success. The multi-platinum certified act is a household name. The safe bet for the four-time Grammy award nominated unit would have been to crank out another metallic bruiser. Instead, frontman Sully Erna sought to carve a new path and re-establish the band more as a hard rock band. It's a bold move, to be sure. Unfortunately, with its seventh full-length, "When Legends Rise", it does not pay off.

The Lawrence, Massachusetts-based band—also comprised of drummer Shannon Larkin, bassist Robbie Merrill and guitarist Tony Rombola—succinctly deliver bare-knuckled, catchy hard rock that's captured with crystal clear production. GODSMACK wastes little time in making its intentions clear. Starting off with the title track, Larkin's simmering movement around the toms facilitates a sense of building momentum through the verses that reaches a point of release at the chorus. While the point of arrival provides a certain sense of gratification, the chorus here as well as the chorus sections throughout the album seem perfunctory at best, by-the-numbers and derivative of a homogenized active rock radio chorus sound at worst.

Tracks like "Every Part Of Me" and "Take It To The Edge" start off promising enough before succumbing to the chosen pitfall of tailoring predictable, formulaic choruses that are almost unbearable. Again, the choruses are the clear weak link. There is a sufficient amount of strong material bookending those parts. In that sense, "When Legends Rise" is far from being a dud entirely. "Under Your Scars" is a formidable ballad replete with a moving Slash-esque solo that's as evocative as the rest of the song. Elsewhere, GODSMACK does realize its potential on flavorful, hard-hitting songs like "Someday" and album closer "Eye Of The Storm".

"When Legends Rise" is a good move for GODSMACK's career. The band has shoehorned itself into 2018's contemporary active rock radio ballgame. There's a very good possibility that it will pay off, for the time being, since that style remains in vogue and profitable. It just isn't fruitful in terms of creativity. With that said, it's worth noting that Erna has never sounded this heartfelt and sincere before.

"When Legends Rise" serves as a metaphor for the phoenix that rises from the ashes. On a personal level, Erna has used the album as a vehicle to help him cope with shedding negative people from his life and, subsequently, moving forward and above it all. Musically, too, the band wanted to "burn it down," so to speak, and build anew. Judging by his optimism expressed in recent interviews, the process has been worthwhile and cathartic for Erna. Unfortunately, it just isn't too rewarding for outsiders.