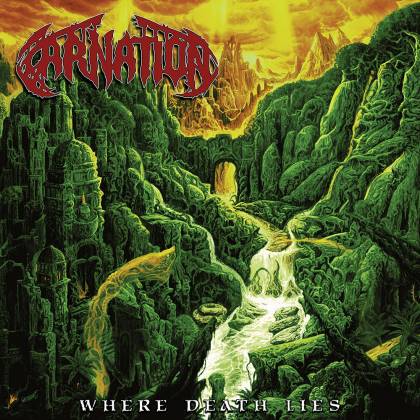 There are insufficient hours in the day to immerse oneself in all of the fantastic death metal being released this year, but CARNATION's second album immediately stands out as a superior creation. 2018's "Chapel Of Abhorrence" was a solid introduction to the Belgians' rampant mix of old-school hooks and infernal churn, but this outstrips it by some margin.

The key to CARNATION's potency lies in their gloriously naturalistic blending of deathly sub-strains. Opener "Iron Discipline" erupts with the belligerent, war-hungry intensity of prime VADER. There are insidious ripples of blackened dissonance woven through the riffs, and a thuggishness to the delivery that owes a significant debt to the ugly end of the early '90s American DM scene. CARNATION are superb songwriters with a lightly worn eccentric streak: "Sepulcher of Alteration" may initially appear to be a textbook death metal banger, but the Belgians never take the obvious route to a dynamic payoff, switching from a punishing, UNLEASHED-like assault to lurching, skewed doom-death riffs that reek of "Covenant"-era MORBID ANGEL.

"Where Death Lies" takes its cues from extreme thrash, rattling along at a breakneck pace, before bringing the old-school hammer down at a crushing mid-pace, spiraling off into wild grooves and bursts of maxed-out violence. That ability to switch tempos with exquisite fluidity underpins most of these songs: from the gritty and grinding "Spirit Excision" to the icily melodic but intermittently vicious "Serpent's Breath", CARNATION are not so much slaves to death metal's primitive values as they are masters of its endlessly malleable spirit. There are certainly lots of death metal bands following more adventurous and subversive routes to brutal glory, but there's something particularly thrilling about hearing the genre being subtly but unmistakably reshaped to fit this band's ferociously focused but ever-so-slightly peculiar musical vision.

Or, if you would rather just have the cold, hard facts: "Where Death Lies" is a smart and distinctive death metal record that will almost certainly smash your face in.

WOLFGANG VAN HALEN On Performing VAN HALEN Songs With DAVE GROHL: 'I'm Super-Happy With How Everything Came To Be'