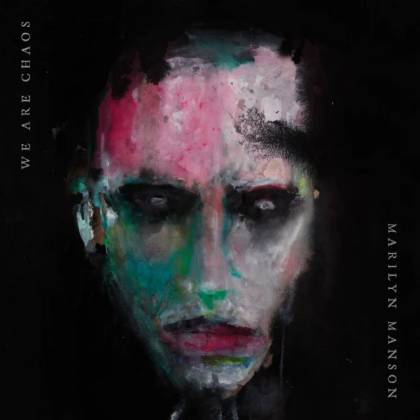 Pop culture icon MARILYN MANSON wrote his eleventh studio album prior to the onset of the pandemic. Yet the 10 songs on-hand reflect the madness and uncertainty that captures the essence of this turbulent era. With "We Are Chaos", the shock rocker rides along the trajectory that his musical career has been traveling upon and makes up for the hiccup that was 2017's mediocre "Heaven Upside Down". "We Are Chaos" capitalizes upon MANSON's strengths and depth while keeping things interesting and fresh in the process.

The talented frontman employs his broad skillset and ambition on "We Are Chaos" in a variety of ways. His visual art, a self-portrait, adorns the release's cover, and he produced the album alongside Grammy Award winning country artist Shooter Jennings, son of the late great outlaw country pioneer Waylon Jennings. The two musicians initially met when they were asked to do a song that never came to be for "Sons of Anarchy", the well-known biker drama series that featured Manson playing the role of a white supremacist during its final season. Their creative relationship truly launched when Manson performed on Jennings's rendition of David Bowie and Giorgio Moroder's "Cat People" on Jennings's 2016 album "Countach (For Giorgio)". The unlikely pair would bond over decades-old music ranging from glam rock to goth. This shared passion sparked the synthesis of "We Are Chaos".

The title track and lead single is a smooth and creepy amalgam of said goth and glam as well as new wave, starting off with psychedelic, modern keys followed by soothing acoustic guitars underlying Manson's David Bowie-inspired crooning. The song swells up progressively and with dramatic effect. Indeed, if "Heaven Upside Down" was MANSON's nod and wink back to the metallic "Antichrist Superstar", "We Are Chaos" is his updated take on the seventies-esque pop rock-styled "Mechanical Animals". Manson, as one of the most notable shock rockers of all time, has obviously been outlandish and incredibly attention-seeking historically. Perhaps it's due to his age, but whatever the case may be, he has evolved to a point where he seems comfortable enough to allow us a longer peak behind the curtain. "We Are Chaos" is arguably his most emotionally exposed and vulnerable offering on a purely visceral level.

"Don't Chase the Dead", for instance, finds Manson dragging Ziggy Stardust through a loose, almost grunge-like soundscape. "Paint You With My Love" is quite possibly Manson's most emotionally bare song to date, overflowing with undeniable passion. The sequencing and flow keep true to his intention to provide depth by, in a sense, dividing the release into a "Side A" and "Side B". Toward the latter half of the album, "Perfume" starkly contrasts the aforementioned songs as it bursts with a hybrid of his inherent spooky quality and his obsession with glam.

"We Are Chaos" isn't without its warts. "Solve Coagula" isn't just mediocre: It's forgettable and pointless. But as a whole, "We Are Chaos" makes sense at this point in his career. The mature songwriting and mindset have been core facets of who Manson has become as a musical artist, and while the style and sounds aren't necessarily new, they're presented in a manner that sounds fresh, modern and exciting.