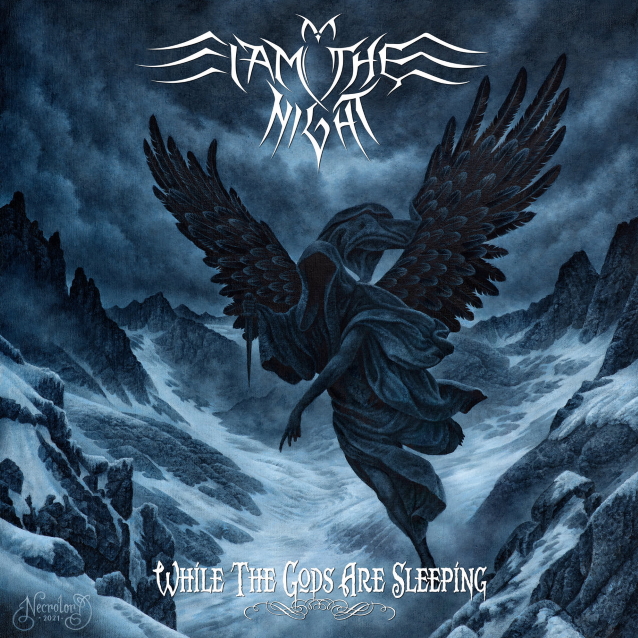 I AM THE NIGHT

While The Gods Are Sleeping

It takes a talent of considerable size to truly harness and express the pure essence of any of heavy metal's many subgenres. Having the ability to conquer more than one of them is, with all due respect, taking the piss. Arguably best known as guitarist and creative mastermind behind melodic death metal titans OMNIUM GATHERUM, Markus Vanhala has also spent the last decade as a member of the increasingly powerful INSOMNIUM and, during the decade before that, was the chief driving force behind criminally underrated melodic metal crew MANITOU. That is a hell of a lot of great music, all stamped with the Finn's unique grasp of both melody and muscle, but Vanhala is a restless soul and now he has set black metal in his sights via I AM THE NIGHT. Working alongside PARADISE LOST drummer Wältteri Vayrynen, frontman Okko Solanterä and bassist Janne Markanen, the guitarist clearly has the spirit of this music pulsing through his veins, and this is both profoundly convincing and wildly entertaining as a result.

I AM THE NIGHT make no bones about their debt to grand and grotesque '90s "second wave" black metal, and to EMPEROR in particular. The underground is awash with second-rate tributes to the grim old days, but from its vivid and punchy production to the obvious craftmanship that has gone into writing these songs, "While the Gods Are Sleeping" is a debut that wields real authority. After the sinister crawl of the opening title track, "Hear Me O' Unmaker" draws a bloody line in the snow with a sustained storm of blitzkrieg blasting and mid-paced bludgeon, haunting but portentous keyboards surging away in the background and Solanterä's inhuman screech bursting through the cacophony like thick jets of hateful steam. "Dawnbearer" is somehow even more intense, with faster blasts, a mid-song descent into gargoyle-encrusted splendor and a near-chewable sense of all-out hostility that would give even IMMORTAL pause for thought. Vanhala's unassailable melodic sensibilities are in evidence to some extent, but I AM THE NIGHT are firmly ensconced in a frostbitten and ferocious world that has very little crossover with the Finn's other projects, and that makes the sheer quality of it all even more satisfying.

At times, "While the Gods…" sounds like a near-flawless encapsulation of everything that made (traditional) black metal such a formidable movement during the '90s. Again, a production that strikes a fine balance between crystal clarity and scabbed-up rawness makes a huge difference, but songs like the gleefully overblown "Ode to the Nightsky" and the equally bewildering "Among the Unseen Ones" would be startling in any sonic context. Neither lost in nostalgia nor hell-bent on progress, I AM THE NIGHT is another triumph for one of modern metal's unsung heroes and, hopefully, the first of many such dives into the dark.