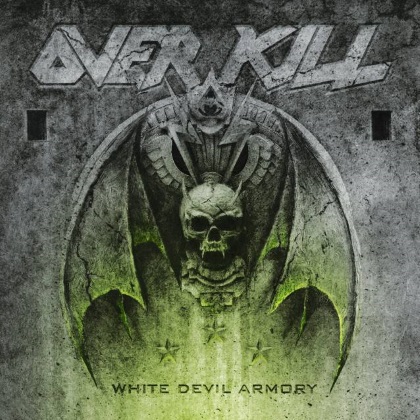 What's to be said about OVERKILL that hasn't been already? Perhaps we'll let Bobby "Blitz" Ellsworth do some talking about the band's latest album, "White Devil Armory". States Blitz in a recent press release, "We don't have an identity crisis. We know what we are. We do this because we like it, first and foremost. We're not sitting there thinking about what's popular when we write a song; we're thinking about what kills. It's not rocket science. It's about action, rather than reaction."

Ellsworth is one of metal's true freaks of nature as he continues to lead OVERKILL with his famed chiseled pipes that will likely expire only when the rest of him does. Seldom few matching Blitz's invested years are able to peel off extended shrieks as he does with "Down to the Bone" on this album. Yet Blitz does it like he always does; with bare effort needed. Fortified by a lineup continuing to clock in valuable miles together, the modern era of OVERKILL has proven to be one of its most energetic. Leaving "The Years of Decay", "Horrorscope", "Feel the Fire" and "Taking Over" to their proper times and personnel, you can begrudge OVERKILL all you like if that suits you. They don't give a damn and objectively-speaking, there's very little in metal music today heavier than "Armorist" or "When There's Smoke" from "White Devil Armory".

"Armorist" wastes not a lick of time winding up OVERKILL's trusty engines and kicking the thrash thrusters on. Everything sounds perfectly in place, straight down to DD Verni's knocking bass and precise shredding from Dave Linsk and Derek Tailer. Ron Lipnicki has proven to be one of OVERKILL's most tireless drummers and his capacity to rotate his speed measures at will makes "Armorist" as beastly a cut as anyone's heard in this band. There's nothing to "Armorist" that hasn't been tried out in OVERKILL before, but all that's expected of the band by their fans at this point is to sound like themselves.

And sound like themselves they do. Having been on a monster roll the past few albums, "White Devil Armory" will disappoint nobody holding rank in the Wrecking Crew. Only a few modifications to the gallop 'n go method OVERKILL employs in their standard script are detected and they're mostly subtle. You can catch a brief choral chant toward the end of "Down to the Bone", a song rolling at heavy mid-tempo with a few thrash blasts. You can feel some punk chunks and later some crushing sound effects to accent the hashing flurry of "PIG". The kicked-back cruncher "Bitter Pill" is about as slow as OVERKILL's been in recent years and that's no insult. There's too much punishment dished up by the riffs and muscular tempo of the main drive before the song shifts gears to a stepped-up BLACK SABBATH jive in the middle section. Later in the album, "It's All Yours" likewise carries a few SABBATH plugs (including an understated Ozzy tweak from Blitz) aside from its extracurricular punk touches.

"When There's Smoke" is tried 'n true thrash and OVERKILL has enough confidence in what they're doing to skid the velocity down to a massive marching center movement before kicking the juice back up. The guitar solo section here is absolutely bonkers but one of the best you'll hear from any generation smacking it down in the name of metal. Afterwards, DD Verni rolls out a ghostly plugging intro to "Freedom Rings", which is picked up by the cautious strumming of Dave Linsk and Derek Tailer. You just know this is all leading up to another crusher and the OVERKILL guys do what they've done for decades now by switching thrash and mosh modes at random, only this time there's a bit of patriotism launching from their mincing modes.

"Another Day to Die" is one of the album's sleeper hits. Not as fast as some of the other songs, the punctuated force behind the song's steady kick is given a further boost by terrific riffing, swarming guitar lines and Blitz's snaggletooth baying. Perhaps there's potential controversy looming on OVERKILL's horizon with "King of the Rat Bastards", depending on how deep people dig into its title. The song is delved straight out of the band's late Eighties playbook, but an amusing woof and march section is worth hanging around for. Wrapping up the album with a trad power metal blaster instead of an obvious thrasher, "In the Name" brings things full circle to OVERKILL's foundation years and there's something nostalgic that sits agreeably in that.

"White Devil Armory" isn't quite as overwhelming and humongous as "Ironbound" and "The Electric Age" preceding it, but it hardly needs to live up to those colossal albums. OVERKILL's not slacking one iota on "White Devil Armory" and only true skeptics will dismiss it. This is still as heavy and exact as it gets in metal music, praise be to the electric gods that keeps OVERKILL's fires stoked.