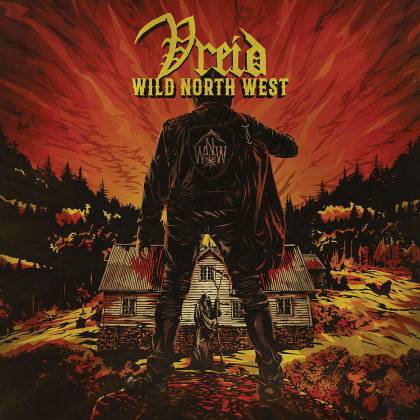 The lore of the infamous Norwegian black metal scene is incredible and over the top, unfortunately at times overshadowing the pioneering and fantastic music. Numerous of these bands and artists have morphed in bold ways creatively, including former members of the melodic Norwegian folklore and Viking-obsessed act WINDIR, who formed VREID following the tragic passing of vocalist and multi-instrumentalist Terje "Valfar" Bakken. VREID has naturally encompassed the foundational melodic black metal of its individual members, especially on 2004's "Kraft", yet the Norwegians branched off toward black 'n' roll more and more as time had passed. But the unit's most significant turning point came with 2018's "Lifehunger", an effort that bridged its signature traits with seventies rock and classic metal from the eighties. Now, with its ninth full-length album, "Wild North West", the collective is diving even further into its passion with eight tracks of spirited, eighties metal-based black 'n' roll.

The members of VREID haven't been strangers to concept albums, releasing two previously, including 2007's "I Krig" and 2009's "Milorg", which touched upon Norway's resistance and liberation during World War II. "Wild North West", a reference to Norway's Sogndal region, is yet another concept album, one that developed alongside a movie. The eight tracks are represented as chapters that divide a tale which is part reality and part fantasy, definitely well-immersed in the bizarre and the surreal without being comical.

The sequencing of "Wild North West" moves forward fluidly. Easily digested from front to back, the album is conducive to the conceptual format, and speaks to listeners on a musical level. Flowing mellifluously, and describing atmospheric peaks and valleys, the mood and energy herein scrapes the belly of depression and mental illness at times. While VREID has become exponentially more dynamic, on "Spikes of God" they dug deep. It is one of their heaviest songs ever and is overflowing with rabid blasting and riffing that's accompanied by eerie acoustic guitar work, which creates an absolutely insane and absorbing wall of sound. "Dazed and Reduced" follows with an eighties metal quality that's upbeat and rich with melodic vocals hinting at King Diamond, without the falsetto.

Purists may scoff at some of the band's detours in recent years. But the members of VREID have nothing to prove. Whether the reference point is their early days with WINDIR or more recently with VREID, the musicians have created top-tier Norwegian black metal that's rightfully revered. "Wild North West" has a lot to offer, and one needs to listen to the album numerous times just to scratch the surface.