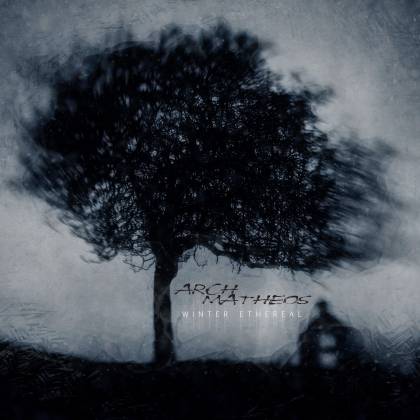 Some voices are simply undeniable. You may need to be a prog metal aficionado to truly appreciate the significance of this ongoing collaboration between two founding members of FATES WARNING, but regardless of historical context, "Winter Ethereal" provides a timely reminder that John Arch has one of the greatest voices in metal history. As an added bonus, guitarist Jim Matheos seems to be reaching new creative heights with his old sparring partner, reveling in the opportunity to revisit but upgrade the classic sound of 1986's immortal "Awaken the Guardian" in a contemporary sonic setting. With all due respect to the Ray Alder-fronted incarnation of FATES WARNING, ARCH/MATHEOS scratches an itch that its titular proponents can only reach when they're together. There's a magic to this partnership, and "Winter Ethereal" is resplendent in its glow.

Eight years have passed since the first ARCH/MATHEOS album, "Sympathetic Resonance", but little has changed in the band's approach: this is expansive but fervently melodic progressive metal, produced to an immaculate sheen but full of vibrant performances, not least from Arch, whose voice seems to have reached a mature sweet spot comparable to the late, great Ronnie James Dio's late-career surge of power and soul. It's immediately apparent from his first contributions to epic opener "Vermillion Moons", that Arch is having the time of his life, fully in command of his instrument and let loose across some frequently dazzling material. Marginally more succinct than its predecessor, "Winter Ethereal" is still a hair-raising showcase for the technical skills of all those involved, from Matheos's masterful melodic presence to the unstoppable rhythm section of Joey Vera and Bobby"Watchtower"Jarzombek. In fact, there are several distinct rhythm sections on display here, with cameos from the legendary Steve DiGiorgio (TESTAMENT/SADUS),CYNIC's Sean Malone and current FATES WARNING drummer Mark Zonder among others, but everything flows beautifully regardless. Ultimately, it's the strength of these songs that seals the deal; the interplay between Matheos's endlessly inventive riffing and arrangements and Arch's unwavering tone is a constant delight.

Not entirely surprisingly, the greatest moments are the most extravagant and intricate: "Wrath Of The Universe" is full of fluid twists and turns, but its mellifluous midsection provides the album with its most spine-tingling dynamic flourish, as Arch soars over the sound of Matheos taking the elegant, scenic route; "Pitch Black Prism" is a similarly dark exercise in atmospheric sleight of hand, with numerous juddering crescendos and a swirling, gothic chorus. The closer, "Kindred Spirits", all 13 magnificent minutes of it, is a bombastic but wonderfully ornate reaffirmation of musical values, utterly absorbing but weirdly accessible too. Meanwhile, at the other end of the songwriting spectrum, "Straight and Narrow" is simply a blistering, irresistible heavy metal song, over and done in four breathless minutes and graced with a skyscraper-levelling chorus.

Three decades on from making a telling and massive contribution to the genesis of prog metal as a recognizable genre, Jim Matheos and John Arch are evidently back to doing what they do best. "Winter Ethereal" is not an attempt to reinvent the genre's still-spinning wheel, but it does provide ample proof that chemistry is everything and hardly anyone does this shit with as much class or conviction.