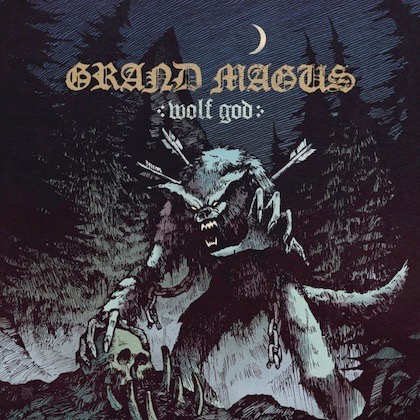 Sweden is a hotbed of all things metal—from djent progenitors MESHUGGAH and prog inclined wizards OPETH, all the way over to the nation's signature death, black and melodeath scenes. In recent years, the likes of GHOST, SABATON and AMARANTHE have churned out catchy, classic metal—or metal inspired—songs delivered with a modern twist, gaining commercial acclaim globally. But the nation has had a considerable history with more traditional forms of metal, reaching back to bands like HAMMERFALL and TAD MOROSE in the nineties, and even further back to doom overlords CANDLEMASS and New Wave of Swedish Heavy Metal artists like HEAVY LOAD and GOTHAM CITY. Stockholm's GRAND MAGUS has married grandiose heavy metal with crushing doom for a couple of decades now, and the act returns with its ninth album, "Wolf God", a release that harks back to their earliest material, which should scratch the itch of many proponents of so-called "true" metal.

Drummer Ludwig Witt has been a part of the fold since 2012, joining frontman JB Christoffersson and bassist Fox Skinner. The latter two musicians founded GRAND MAGUS in 1999, rolling forward from the precursor project SMACK that was born three years earlier. GRAND MAGUS's initial linear, charging approach to songwriting eventually evolved to incorporate more moody and elaborate facets of heavy metal starting with their fifth album, "Hammer of the North", in 2010. While this more recent penchant for epic metal remains, the original template of to-the-point, stripped-down heavy metal proves to be more prominent on "Wolf God", especially on tracks like "Brother of the Storm" and "Untamed".

The ghost of JUDAS PRIEST visits "Wolf God" periodically, especially during the up-tempo "Spear Thrower", a song that also cribs a key riff from BLACK SABBATH's "Children of the Grave". But, by and large, GRAND MAGUS's personalized take on heavy metal takes the driver's seat. "To Live and Die in Solitude", driven by powerful guitars and impassioned vocals, is instantly gripping and riveting throughout. "A Hall Clad in Gold", too, is fiery and vibrant.

"A Hall Clad in Gold" would have been a perfect album opener, but it's actually preceded by the coupling of a lifeless intro and the album's title track. "Wolf God" is packed with a considerable amount of filler material and songs, in fact. The album is generally a likable blend of the direct approach of GRAND MAGUS's early days with the more majestic stylings that the unit has incorporated as it has developed. "Wolf God" isn't essential listening, but it certainly is an enjoyable enough heavy metal album.