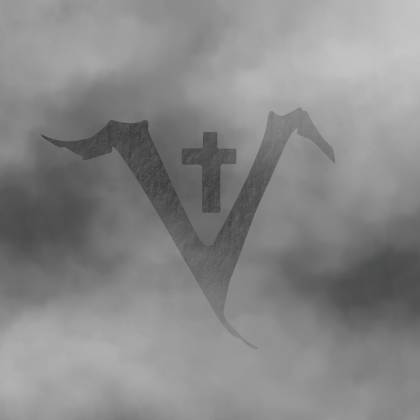 Given the dogmatic way of things, this review should probably be full of dramatic statements about Scott Reagers being the original and therefore the ultimate frontman for SAINT VITUS, undisputed lords of American doom. But let's face it, arguing about whether Reagers or Scott"Wino"Weinrich deserve the requisite accolade is a bit like arguing about which pile of free cash you should stuff into your rucksack first. 2012's "Lillie: F-65" album was a straightforward triumph, Wino's voice as gruffly charismatic as ever. Six years on, "Saint Vitus" pulls off the same trick, but this time with Reagers, who kindly stood in for Wino while he was reviving THE OBSESSED. We can and should like both, because both albums sound like SAINT VITUS: in thrall to the riff, impervious to the tides of time and firmly and proudly in the cup-half-empty camp. Life sucks. Let's doom.

It is perhaps appropriate, Reagers's presence noted, that "Saint Vitus" is slightly more stripped down and primitive than its predecessor, with very obvious echoes of the ragged grit and glory of those earliest recordings and a noticeable sharpening of guitarist Dave Chandler's psychedelic instincts. There is almost a touch of the experimental in moments like trippy instrumental "A Prelude To…" and the wild and woozy guitar solo Chandler peels off at the end of "12 Years in the Tomb". But the essence of the VITUS experience remains the same: this is all about wringing fresh drops of inspiration from that ageless Iommian blueprint, with everything underpinned by a jolting dose of outlaw punk rock belligerence. "Bloodshed"'s heads-down stampede and the closing 90-second snot-strike of "Useless" are the only moments of outright myopic brutality, with not unexpected shades of MOTÖRHEAD and BLACK FLAG making the garage walls shake, but there is a madness and savagery in Chandler's solos throughout. Check out the disorientating squall of churning, whiteout scree he unleashes during "Wormhole" and witness the sound of doom with the brakes off.

Those seeking the truest of true doom will doubtless gravitate towards "Hour Glass". An archetypal slow-motion, waltz-time paean to Sabbath-ian heft, it could easily have been a perfunctory exercise in box-ticking, but the sheer brilliance of the song's central riff lifts it way above the average. Another synapse-flaying Dave Chandler solo certainly helps too. You can almost hear him picking bits of psilocybin out of his teeth as he lets rip, which must mean that "City Park" is the inevitable chilly comedown; black ambience, the chirruping of cicadas and Reagers's menacing drawl conspiring to make "Saint Vitus" a more nightmarish place to be. It's followed by "Last Breath", both this record's unquestionable apex and one of the finest things Chandler has penned since the days of "Born Too Late". A doom metal monolith that thrums with haughty disdain, its seven minutes of glowering disquiet and spectral threat provide Reagers's embittered howl with a grand but gritty platform before veering off on another untamed, acid rock detour.

Nostalgia precludes most of us from embracing new records with the same reverence that we regard the classics, but "Saint Vitus" deserves respect as a sturdy, credible and intermittently startling addition to an illustrious canon. You can't really ask much more than that.