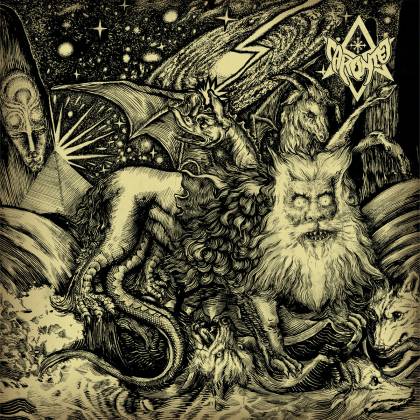 They are definitely not the first heavy metal act to sing about Aleister Crowley, but at this point in time, CARONTE are easily the most effective. "Wolves of Thelema" is the Italians' fourth full-length album and the audible culmination of a steady evolution that has seen them mutate from relatively straightforward doom inclinations toward a wild, deeply gothic and thrillingly eccentric vision of riff-driven occultism. "YONI", 2017, laid down the necessary groundwork for this self-evident career peak, but "Wolves…" has the energy and cocksure power of a debut: it's as if CARONTE have experienced an unexpected surge of infernal might, leading to the strongest songs they've ever written and a further developing of an already absorbing sonic identity.

The most exciting thing about "Wolves of Thelema" is how it seems to echo all the best malevolent, occult rock of the last 30 years without stealing directly from anyone. Frontman Dorian Bones's voice will certainly cause fans of DANZIG, BABYLON WHORES and GRAVE PLEASURES to prick up their ears, but with doom metal providing the core of CARONTE's sound, and a deliciously black metal-like sense of simmering malice that runs from the ghoulish swagger of the opening title track through to cataclysmic endpoint "Stairway to the Cosmic Fire", the strongest impression is that of hell's house band, channeling the greats of grimness but reveling in their own runaway madness.

These are fantastic songs, too. "Hypnopyre" is all brooding, post-punk slurry and haunting crescendos; "Quantum Ecclesia" is an austere, chant-heavy dismantling of divinity, fueled by '80s goth rock and vampiric pomp; "Queen of the Sabbath" is an anthem hewn from pure gothic rock fury, with a driving, Sabbath-ian gait and sparks of tripped-out trad metal.

When you consider how the occult rock movement of a few years ago fizzled out to bumbling mediocrity, it's incredibly exciting to hear something that fits that unholy bill without sounding like an act of lazy nostalgia. "Wolves of Thelema" is exactly the genre-weaving dive into the darkness that the Devil's doctor ordered. With a dash of Italian flair and a guitar tone that will take the first two layers of skin off your face, CARONTE are saluting the Beast with vastly more style and substance than most.