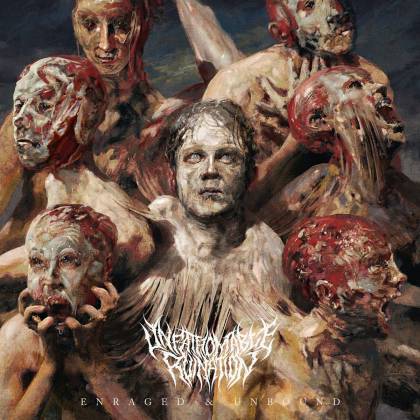 Thanks to the fact that there are literally thousands of brutal death metal bands active right now, it is becoming increasingly difficult to accurately separate nutritious wheat from mediocre chaff. Thankfully, there are still occasions when an album leaps from the speakers, grabs the terrified reviewer by the throat and screams "This is really fucking good!" into his, or indeed her, face. British brutes UNFATHOMABLE RUINATION have already proved their credentials, not least with 2016's spine-shattering "Finitude" full-length. But "Enraged and Unbound" plainly represents a great leap forward and exudes an all-too-rare sense of superiority from belligerent start to apocalyptic finish (and that's not even taking into account the absolute stunning ELIRAN KANTOR artwork that adorns this record).

The key to this band's mastery of the form is in their versatility and intuitive grasp of what makes death metal's many and varied strains so consistently fruitful and compelling. Rather than adhering to some predetermined template, these songs take straightforward brutal death metal as a starting point and then nimbly veer off in all manner of peculiar directions, taking in everything from waves of claustrophobic sludge to joyously ignorant tech-slam beatdowns. Perhaps more importantly, UNFATHOMABLE RUINATION defy the usual conventions by concerning themselves more with the penning of memorable songs than with the remorseless crushing of skulls. From the sprawling grimoire of "An Obsidian Perception" to the subtly blackened and groove-driven "Maniacal Disillusion", everything here boasts a handful of pointedly old-school moments, whether in the thrash-tinged gait of certain riffs or the numerous occasions when something close to a chorus seems to erupt. If you want death metal that eschews melody entirely, look elsewhere: herein lies extreme metal that draws its influences from across the whole sonic spectrum, resulting in an absorbing and unpredictable 44 minutes of outright savagery. Vocalist Ben Wright's drain-emptying growls and tight-as-hell delivery are merely the bloody icing on an already irresistible confection.

Harking back to death metal's early days while giving their ultra-extreme peers a robust lesson in violence, UNFATHOMABLE RUINATION sound like major contenders here. File next to DISENTOMB's "The Decaying Light" as one of 2019's most exhilarating and idiosyncratic blizzards of hateful noise and guttural disdain.