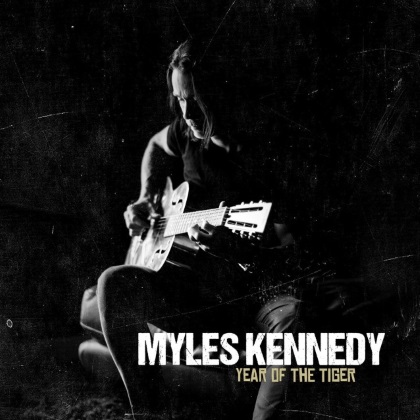 Year of the Tiger

Myles Kennedy has gained a massive reputation as a singer and songwriter with ALTER BRIDGE and SLASH and prior to, THE MAYFIELD FOUR and CITIZEN SWING. It's no fluke Kennedy is considered one of the most dynamic singers in contemporary rock. Yet you haven't fully heard what this cat is capable of until you sit down with his powerful solo album, "Year of the Tiger".

1974, a corresponding tiger year on the Chinese zodiac, is when Myles Kennedy lost his father. The candle burns in song on this album, yet there's more to it than that. "Year of the Tiger" is largely an interpretive expression of his mother's grief, which coincided with Kennedy's perplexed rebuffing of conventional religion. When Myles was four years old, his father died as a follower of the Christian Science church. Refusing to treat his illness in accordance to his doctrines, it is this point of contention from which Kennedy writes "Year of the Tiger".

Those coming to this album looking for a shot of rock are advised that Myles Kennedy reveals an entirely different dimension to his talents here, tapping into blues, folk, alt and country. He stakes a forlorn path through desolate steppes, only Neil Young better captures in sound. Standup bass, mandolin, acoustic guitar and banjo provide an arresting, earthy cadence behind Kennedy's dialed-down electric guitars. For those experiencing loss, this is a compassionate, if pained resonance to heal by.

Myles Kennedy exposes his—and, correspondingly, his mother's—soul through his breezy and sentimental wailing on the title track. It's a loner's ode to despair in the wake of death, swept into an angry plunge on "The Great Beyond", the latter birthed out of a Jim Croce carousel of acoustic melancholia. What Myles Kennedy does shrewdly with "The Great Beyond" is capture the essence of Croce's dejected minstrel from "Time in a Bottle" while jacking the choruses with heated octaves. At his highest pitch, Myles Kennedy can give even young Geoff Tate a hard run.

Kennedy, a self-professed agnostic, questions dogma with boggy guitar slides on "Blind Faith", and he spews his objections as to why God would allow his father to die on the uppity "Devil On the Wall". He's looking for answers from a deity he's never seen on "Turning Stones" while dialing up an unfettered country bake to counter the lyrical turmoil railing throughout "Haunted By Design".

"Year of the Tiger" is a wrenching reflection upon loss, its stripped, echo-banged projection designed to let Myles Kennedy's ambivalence and sorrow ring clearer. "Goddamn, I miss you now", he seethes on "Nothing But a Name". "Love Can Only Heal" is the closest number to pure rock as this album gets, and man, does it bleed, as does this whole album. The entire course is made more beautiful with Kennedy choosing to voice his mother's anguish over his own. Any deserving parent should be graced with devotion and empathy this intense.