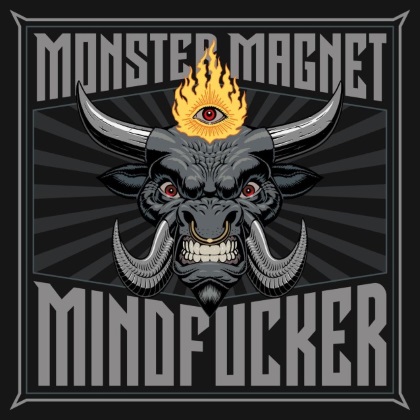 For the band's 11th album, the first in five years, MONSTER MAGNET gets back to its roots by wringing out some old-school grit rock. By mere title alone, "Mindfucker" is designed to get your attention, as if the year is 1985 instead of 2018 and the band is begging to make the Filthy Fifteen. Filthy this album is, but not always for its lyrical content. If Mariano Rivera's cut-fastball draws accolades of "filthy" from MLB broadcasters, then consider MONSTER MAGNET's rude riffing and heavy beats on "Mindfucker" likewise filthy.

There's megaton influence from what Chris Kosnik and Bob Pantella have been doing in THE ATOMIC BITCHWAX—one of the greatest bands on the planet—within the pure rock glory of "Rocket Freak". This jam checks its pulse on the first note and hurriedly spikes it to full throb. Dave Wyndorf's naturally enjoying the chance to cut loose vocally with his, Garrett Sweeny and Phil Caivano's gristly guitars wailing all around him. Chris Kosnik knocks the hell out of the bass line to "Soul", maintaining a potent thrust with Bob Pantella, driving with the slippery, if precise, force of a motor-powered dildo. When "Soul" reaches its ground-out climax, stand ready to duck. There's plenty more amplifier fog seeping through the banged-out title cut.

Psychedelic waves check down the six minutes of agitation grumbling at the epicenter of "I'm God", with Chris Kosnik helming the groove. The 7:20 "Drowning" calms the pace only long enough to catch the album's own breath before jacking the decibels to strain and looping the brawny riffs toward its deafening culmination.

Pantella's thumping gives the ass-kicking "Ejection" a vigorous platform for the guitars to screech like partying demons. Utilizing back-to-basics effects, MONSTER MAGNET continues with a terrific T-REX crash dropped across "Want Some". Afterwards, the group tests the cracks of a left-for-dead desolation boulevard previously staked out by SWEET on "Brainwashed". Expect the guitars to get positively rowdy in translation. Somewhere between NICK CAVE AND THE BAD SEEDS and THE BYRDS does the swinging haunt of "All Day Midnight" drop.

On this album, the beat is king as much as the yowling riffs, which makes "Mindfucker" a high octane treat for the feet as well as the ears. Just try not to tap along to this album's industrious rhythm. You'd do better letting Mariano Rivera dust you off home plate with three consecutive cutters.