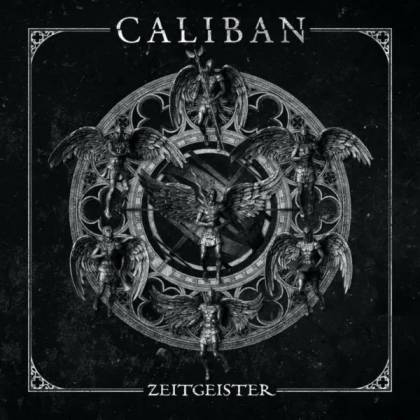 While there was a definite period when metalcore seemed creatively redundant and ready for the scrapheap (and just for fun, I'm gonna say 2006, in-between the third and fourth AS I LAY DYING albums),but somehow the genre has endured far beyond its somewhat meagre artistic aspirations. It helps that KILLSWITCH ENGAGE are still out there and still doing it better than everybody else, but no scene survives without strength in numbers. Perhaps surprisingly, German bands like HEAVEN SHALL BURN and CALIBAN have done as much as anyone to keep metalcore's fires burning brightly. Admittedly, "Zeitgeister" is vastly more generic and predictable than HEAVEN SHALL BURN's 2020 magnum opus "Of Truth and Sacrifice", but it does exhibit a similar disdain for taking the easy, pop-centric route. In fact, there is a sense that CALIBAN are the last of the metalcore diehards, blazing militantly away with supreme focus, irrespective of time and trend. Boasting a demented vocal cameo from NASTY's Matthi Tarnath, "Trauma" even pulls off the neat trick of briefly sounding more like late '90s IN FLAMES than, you know, actual IN FLAMES. All cynicism aside, we are a world away from the glossy superficialities of mainstream metalcore here: CALIBAN play it like they mean it, and with a much more diverse array of influences and ideas than one might have predicted.

As with all such things, this record's impact will depend largely on whether the listener is a fan of harsh-to-clean vocal patterns and hulking, lobotomized breakdowns, but "Zeitgeister" is adventurous too. "Intoleranz" weaves some industrial menace into its thuggish, staccato barrage; "Nichts Ist Fuer Immer" is a scabrous, goth metal anthem with at least two lethal hooks; "Ausbruch Nach Innen" goes full tech-deathcore, replete with surging synths and cavernous reverb.

It's the closing "nICHts" that seals the deal. Anthemic, belligerent and rousingly melodic, it's simply a sophisticated, imaginative and, dare we say it, mature take on a formula that has been used and abused by countless also-rans and lightweights over the last two decades. "Zeitgeister" won't blow minds, but it will remind you why this music was so exciting in the first place. It'll also remind you why, seemingly against the odds, it continues to strike a chord with so many.