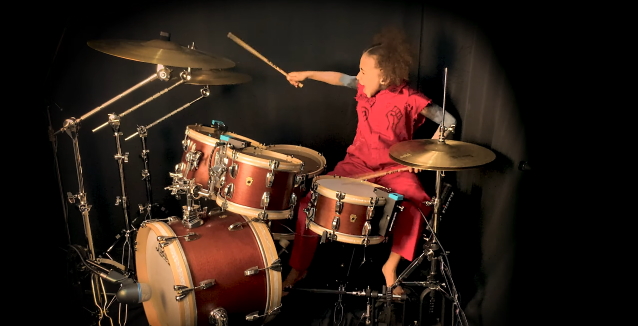 10-year-old music prodigy Nandi Bushell, who recently defeated Dave Grohl in a drum-off, has uploaded a video of her playing along to SLIPKNOT's song "Unsainted".

In a message accompanying the YouTube release of the one-minute clip, she wrote: "Yes! I am a total metal head! I love how awesome the drumming is in @Slipknot ! This is my first attempt at double pedals! Taking my playing to the next level. This song is called I #unstainted by #slipknot! Incredible drumming Jay Weinberg! This song brings my A game Corey Taylor #metalhead #metal #heavymetal #doublepedals. Thank you Ludwig Drums my new kits is sounding awesome! Zildjian Company Vicfirth Drum Sticks Roland #roland #vicfirth #zildjian #ludwig #zildjianfamily #zildjiancovers".

Several hours after Nandi posted the video, SLIPKNOT drummer Jay Weinberg retweeted the clip and wrote in an accompanying message: "Nandi!! You're unreal! I'm blown away by your passion and energy. Keep shredding on those drums! Next time we roll through your town, give me a shout — you gotta show me how you do that stick flip right there".

The young multi-instrumentalist, who lives in Ipswich, England, started playing the drums when she was just five years old. She now plays several instruments, including bass and guitar, and is said to be learning piano.

Last month, Grohl and Bushell announced that they were co-writing a song for Nandi to someday perform with the FOO FIGHTERS. They also met virtually for the first time, with Grohl asking her: "When the FOO FIGHTERS finally come back to the U.K., do you think that you would get up onstage and jam with us? But it has to be at the end of the set, because you're gonna steal the show. It can't be at the beginning of the set, because if you come out first, it's just all downhill from there."

Grohl is not the first high-profile rock musician who was impressed by Bushell's videos. Her cover of RAGE AGAINST THE MACHINE's "Guerrilla Radio" was noticed by the band's guitarist Tom Morello, who later sent her one of his guitars.

Nandi!! You’re unreal! I’m blown away by your passion and energy. Keep shredding on those drums! Next time we roll through your town, give me a shout — you gotta show me how you do that stick flip right there 🤘🏻🥁🔥 https://t.co/5JPvbPoALL