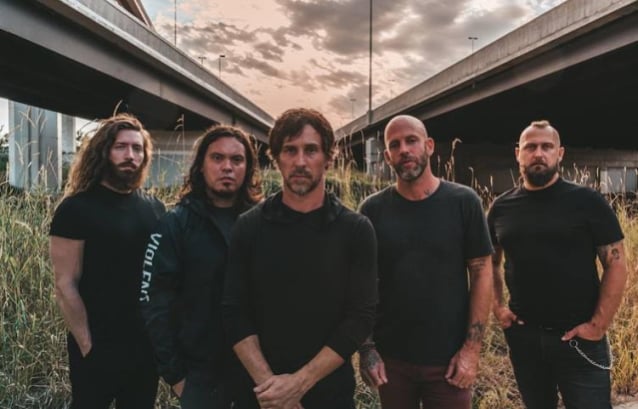 Knoxville, Tennessee alt-rockers 10 YEARS have shared the music video for their brand-new song "The Optimist". The track is a three-minute hook-fest of crunching riffs and earworm chorus with the 10 YEARS DNA running through it. The video shows the band's life on the road, from euphoric club shows and enormous festival stages to the band hanging around on off days, to give you a behind-the-curtain view to life on the road.

Talking about the track, guitarist Brian Vodinh says: "'The Optimist' riff first began as an improvised jam in between songs at a live show. Sometimes the band would randomly improvise on stage, and the song's main riff happened by a happy accident one night, and then we decided to turn that little moment into a proper song. The lyrics are about how life can beat you down, but you must keep searching for ways to push on and not let it make you too cynical. It's about the fight to keep a good perspective on things."

Tonight 10 YEARS will kick off a 21-show European tour with Canadian rockers THREE DAYS GRACE. The trek will see the two bands play shows in the U.K., Germany, Switzerland, Italy, Austria, Hungary, Romania, Czech Republic, Poland, Luxembourg, Belgium, and The Netherlands. The tour will mark the first time 10 YEARS has played in Europe since 2018, and it gives European fans the chance to hear songs from their most recent studio album, 2020's "Violent Allies", live for the first time. Written in Woodland Hills, California, the LP was recorded over a five-week period with Grammy Award-winning producer Howard Benson (MY CHEMICAL ROMANCE, HALESTORM, PAPA ROACH). "Violent Allies" has amassed over 30 million streams, with the lead single "The Shift" smashing through the 10 million Spotify stream barrier alone.

Talking about the upcoming tour, Vodinh says: "THREE DAYS GRACE has always been a band that we have admired. Being able to not only share the stage with them but to have the opportunity to play in front of the amazing, music-hungry fans of Europe again is a dream come true for us. The fans in Europe are so passionate, and they dig deeper than the surface with our music which is always something we have loved about them."

10 YEARS is currently working on new material for a 2023 release.