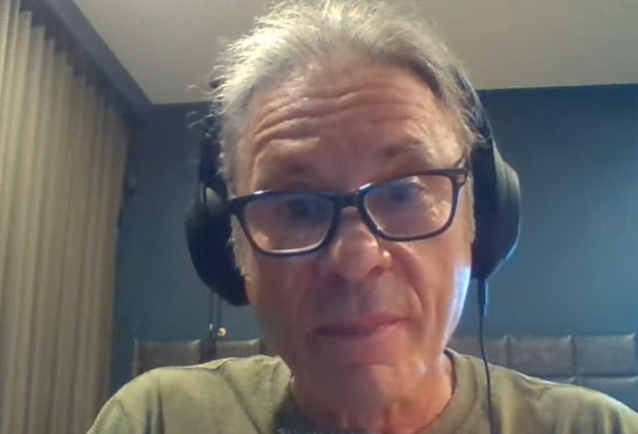 BRUCE DICKINSON On Groupies: 'The Big Moment Is When You Realize That You Can Manipulate People Because Of Who You Are'

The latest episode of "Psycho Schizo Espresso", the podcast from IRON MAIDEN's Bruce Dickinson and Oxford University psychologist and best-selling author Dr. Kevin Dutton, has just been launched across all podcast platforms. Check it out below.

In this episode, Dickinson and Dutton catch up with each other from different sides of the globe. With Bruce in San Antonio, Texas, in the middle of IRON MAIDEN's world tour, Kevin has a unique opportunity to treat him as one of his "guinea pigs" and delve deep into the psychology of one of the rock world's true global icons. Kevin identifies Bruce as one of the toughest people he's ever met (and, given some of the folk he hangs around with, that's saying something). But where does that toughness come from? Bruce talks about his childhood in the north of England; about how discipline, resilience and humility are the keys to longevity in the ego-infested waters of the music business; and how a bulb of steamed garlic always helps him "come down" after a show.

Bruce and Kevin rarely talk in a straight line and their fascinating conversation has all the familiar twists and turns that we've now come to expect. Bruce reveals how he once fought off two skinheads outside a pub by fencing them with his umbrella; why airline pilots never eat the same dinner; and how our ego is like a balloon… it shouldn't be pumped up too big; it should be let back down again slowly to prevent it flying all over the place, and if it comes into contact with a prick, it has a tendency to explode.

Speaking about 1980s hard rock bands who often engaged in debauchery with groupies, Bruce said (as transcribed by BLABBERMOUTH.NET): "We toured with bands who were like that, and they'd look at us like we were just weird. Yeah, obviously, we all had girlfriends, and sometimes you had girlfriends who were temporary girlfriends. [Laughs] But I don't like it when there's this undercurrent of abuse. It was Pete Townshend [THE WHO], who knows a bit about abuse, I think, because he underwent quite a lot of it, and he said — and it clicked for me — he said, 'The big moment is when you realize that you can manipulate people because of who you are.' Because when you first start out, you don't have any realization that people might want to sleep with you because you're onstage. You think they want to sleep with you because they want to sleep with you, because it might be nice and because they like you. And often that's true — it's often that it's true… And yes, there are some people that want you as a notch on the bedpost, just as some guys have that [same thing] with women, and, yeah, we've all been guilty of it, no doubt. But there comes a point, which is incredibly corrupting and corrosive, in which you suddenly go, 'Hang on a minute. You can actually kind of click your fingers and make things happen.' And that's a really scary moment, to realize that that power exists. And that's why the Harvey Weinsteins and all the rest of it, and the whole Hollywood thing… So that awareness of that, that's when it becomes really corrupting. I mean, the guy… What's his name? R. Kelly, who's been indicted, been convicted, I think. It's the same thing for actors as well… And then when you throw in a bucket of mood-altering drugs into the equation, then the wheels really come off the bus."