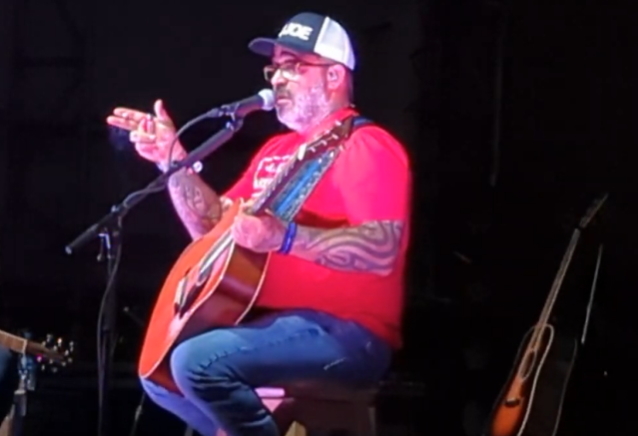 AARON LEWIS Claims He Knows 'What The F**k Is Going On', Rails Against 'Tyrannical People' In U.S. Government

STAIND frontman Aaron Lewis has once again railed against the government, saying that our representatives have failed to properly carry out the most basic and important tasks.

The 50-year-old Lewis, an outspoken conservative rocker who reinvented himself as a solo country artist in the last decade, voiced his views on the current political situation in the U.S. before performing his single called "Am I The Only One" during his July 23 concert at Dr Pepper Park At The Bridges in Roanoke, Virginia.

He told the crowd (as transcribed by BLABBERMOUTH.NET): "We have all lost our connection with the Constitution. Because if we knew the Constitution and the Bill Of Rights, we would know that it clearly states that it's our responsibility as we the people to take back a country governed by tyrannical people. They have proven that they have business whatsoever as the representatives of us. All those people that sit in Washington, D.C., in the grand scheme of things not all that fucking far from here. I can almost smell them in the air. It smells like fucking treason, is what it smells like. It smells like they're blaming us for an insurrection that they committed.

"We the people. It's a very strong statement right there. No other country's documents that create that country starts with 'we the people'. It doesn't.

"Start paying very close attention to what the fuck is going on," Lewis added. "'Cause, unfortunately, the reason why I get myself in trouble every time I step out on this stage if because I know what the fuck is going on. And I'm not gonna shut the fuck up until everybody else knows what the fuck is going on too. Because here's the difference: I sit up here right now and I run my mouth for everybody. Even the fucking idiots that choose to spout all their anti-America, anti-family, anti-everything bullshit. Because you know what? As much as I don't wanna hear it, they're free to say it. But I'll tell you what right now — freedom goes in all directions. Which means that you're free to be an asshole. You're free to be completely deranged and off in your own fucking universe. You're free to be a man and slice your fucking penis in half and fucking scrape all the seeds out like a cucumber and fold it all back up inside you. You know what? You're still a man that's just fucking self-mutilated himself. You can do all that, and I will stand up for you, because I believe in your freedom to be able to do that even though I don't agree with you at all.

"That's the difference. They wanna shut us up and shut us down. And I wanna fight for the same fucking freedoms that they love. The ability to be able to say shit like that and not have the government show up at your door the next fucking day.

"This is our country — not the government's. We have every right to remove them."

Aaron Lewis is coming back to Dr Pepper Park on July 23rd!!

Join us for our brand new series, the Northwest Ace Summer...

Posted by Dr Pepper Park at the Bridges on Tuesday, February 1, 2022

Having a great time at Dr Pepper park seeing AARON LEWIS with Travis and Elizabeth . He put on one hell of a show …sorry for the low quality on video only way to get it to load

Aaron Lewis at Dr Pepper Park was an amazing concert! Thankful miss Alexis Hogan asked me to go with her... he put on one heck of a show!! Hopefully I helped make her first concert experience an awesome one!!

We love the New River Valley area of our beautiful state. Salem and Roanoke are such lovely towns. Our first time...