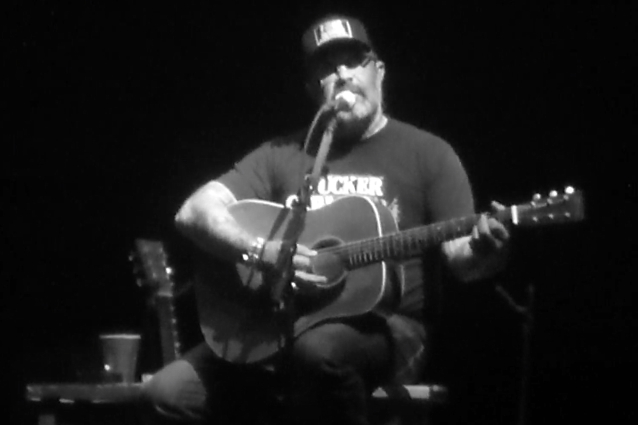 AARON LEWIS Dedicates His Song 'Kill Me Like You Love Me' To TAYLOR HAWKINS: 'We Will Miss You Dearly'

STAIND frontman Aaron Lewis dedicated his song "Kill Me Like You Love Me" to Taylor Hawkins during his concert last night (Saturday, March 26) at Rio Vista Outdoor Amphitheater at Harrah's Laughlin in Laughlin, Nevada. Fan-filmed video of his performance can be seen below.

Prior to launching into the track, the 49-year-old Lewis, an outspoken conservative rocker who reinvented himself as a solo country artist in the last decade, told the audience: "We lost an amazing drummer and an amazing human being. There was never anything going on around him but a good time. And Taylor Hawkins, we will miss you dearly."

Hawkins was Lewis's political polar opposite, having been a vocal opponent to former U.S. president Donald Trump on several occasions in recent years. In a 2017 interview with Onet News, Taylor stated about the political climate in the United States: "It's insane, but it really is a mirror image of our culture in America right now. So people blame [Trump], but he's just a symptom of a generation of reality TV-obsessed, selfie-obsessed, Facebook-obsessed, tweet-obsessed, self-obsessed people. So we got that president because I think, unless the Russians really did hack in, we got what we deserve."

"I think in a certain way, it's a good chance for people to take a look at where we are as a culture and say, is this where we want to be?" Hawkins continued. "An orange, fake-haired, tweeting president who tweets childish remarks about people who say little mean things about him, because that's where we are right now. It's a fricking weird freaky time, but it's really representative of where our culture is right now."