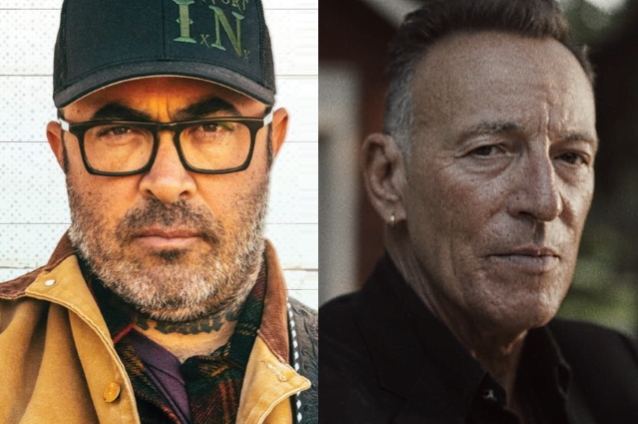 AARON LEWIS: Why I Called Out BRUCE SPRINGSTEEN In 'Am I The Only One' Song

During a recent appearance on The Daily Wire's "Candace" show, STAIND frontman Aaron Lewis discussed his controversial new solo single, "Am I The Only One". The track, which takes aim at liberals and touches on American flags burning and statues that have been removed in the country, was written by Lewis with Ira Dean and Jeffrey Steele.

Speaking about how the song was conceived, Lewis said (as transcribed by BLABBERMOUTH.NET): "Me and my friend Jeffrey Steele and another friend, Ira Dean, had gotten together and sat down and decided that we were gonna write an honest song about what we all just had gone through in our own lives with the shutdown and with the craziness that we've watched on TV over the last 18 months. And I feel like you don't have to stand on one side or the other to have, at one point during all of this, looked at your television and screamed some profanities at it, like, 'What is happening to this country?' We're one nation under God indivisible, with liberty and justice for all."

Aaron went on to suggest that honesty is something that is very much lacking in today's music, with many artists choosing to refrain from voicing their political views.

The "Am I The Only One" chorus sees Lewis singing: "I'm not the only one, willin' to fight / For my love of the red and white / And the blue, burnin' on the ground / Another statue comin' down in a town near you." Lewis also criticizes Bruce Springsteen at the end of the track, singing: "Am I the only one who quits singin' along every time they play a Springsteen song."

Asked why he chose to call out Springsteen in the song's lyrics, Lewis said: "Because he's always portrayed himself as the all-American middle-class guy. And during all of this craziness, he said that if one man is re-elected to the office of presidency that he was gonna move to Australia. How American is that? You're gonna bail on America just because you don't like the guy that may have gotten into office?"

Lewis told "Candace" that there was initially some pushback from people about him wanting to record and release such a blatant conservative political protest song. "There might have been a little tinge of that in the beginning, but I think everyone successfully saw through that," he said. "And I even got support from some places that I didn't expect to get support from — like my record label. Come to find out Scott Borchetta is pretty big on the First Amendement, freedom of speech."

Springsteen can best be described as Lewis's political polar opposite, having been a vocal opponent to former U.S. president Donald Trump on many occasions. In August 2020, Bruce went as far as to allow the use of his song "The Rising" in a video that aired during night one of the Democratic National Convention.