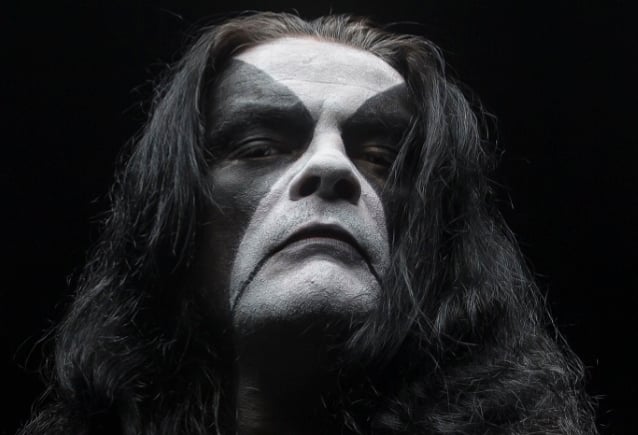 ABBATH Is 'Convinced' He Can Stay Sober: 'It's Time For Me To Get My S**t Together'

Former IMMORTAL frontman Abbath, who currently leads his own namesake band, has opened up about the circumstances that led to the cancelation of several shows on ABBATH's South American fall 2019 trek.

In late November, Abbath — whose real name is Olve Eikemo — issued a statement saying that he had been battling addiction and vowing to commit himself to a rehab program that would help him "get clean once and for all."

Speaking to journalist Martin Blekkerud of Norway's Dagbladet newspaper for this past weekend's edition of the Dagbladet Magasinet, Abbath stated about the Buenos Aires show: "I had been drinking all day since I left Chile that morning. Two bottles of Jack Daniel's whisky. I trashed the backstage area after the gig. Mirrors, chairs, bottles, tables. Everything. But most of all, I trashed myself on the inside. When I woke up the next day, I knew one thing for sure: I had to get help. The party had lasted way too long, and I was the only one who didn't leave. I am very happy to be alive. I am 47 years old. It's time for me to get my shit together."

Everyone Dagbladet talked to in Abbath's band was nervous about him starting to drink again. Getting sober is one thing, but staying sober is a completely different ball game.

"I am convinced that I can do this," Abbath said, admitting he had been a drinking and using drugs for a long time. "Back in 2003, I was so sick of drinking. Someone gave me speed, and that was, like, 'Wow!' I was using amphetamines on and off until a few weeks before the world tour in the fall of 2019. Then I started drinking even more. I started every day with a couple of Lemmys, as I like to call them — whisky and coke. I thought I was in control, but I started to forget lyrics and riffs onstage. Everybody around me was nervous. And I was pissed off all the time."

Instead of going to rehab, Abbath started attending AA [Alcoholics Anonymous] meetings and working out.

"I feel 20 years younger," he said. "I have regained self-respect — and my life. The strange thing is that I didn't know I had a problem until I was confronted with it. But I didn't want to go to rehab. That would have been too much for me. You know, I am not an alcoholic, I only need to stay mentally strong."

When asked to clarify his comment that he is not an alcoholic, Abbath said: "That's right. I had no withdrawals or anything." However, he understands that he can't drink ever again. "It's not gonna happen," he said. "I have too much to lose."