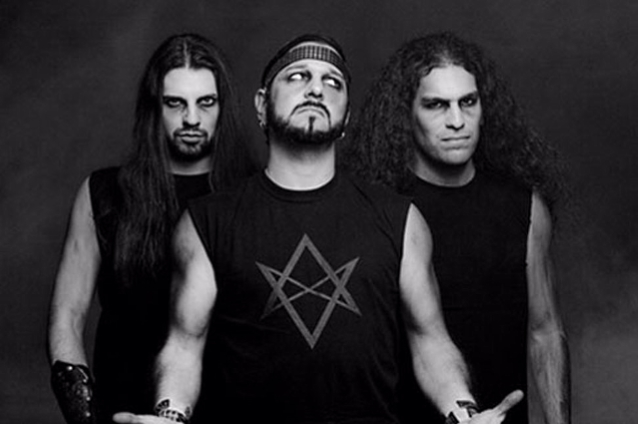 Black metallers ABSU have split up.

Longtime drummer and vocalist Russ Givens, who goes by the stage name Proscriptor McGovern, broke the news of the band's breakup in a social media post earlier today.

He wrote: "After meager deliberation and zero remorse, I have decided to dissolve ABSU after three decades of existence. Collectively and universally speaking, this decision is finite due to insoluble circumstances, which has led to this ultimate result. No amount of time, exertion, formula or fashion can alter my verdict.

"Refusing to further comment on the subject, I leave thee with the following enchantment:

"{Vii}For there are bitter waters of Chaos held immobile under (the) ground – And the Sovereigns, who personify them, reign over Opacities and Beyond.

"[II] Beseech these All-Begetters in darkness, outside the circles of time. In Chaos’ sleight of hand, the Deep will respond.”

"{Vi}Never Blow Out The Eastern Candle —

Back in 2018, Melissa Moore, better known as ABSU guitarist Vis Crom, said that she was no longer in the band, blaming her bandmates' reaction to her coming out as transgender for her exit. She said at the time: "The most fucked up transphobia from my bandmates is what happened. The band is broken up and I am still at a loss on how to handle it. It is ONLY because I am trans."

ABSU came to prominence with the release of its 1993 debut, "Barathrum: V.I.T.R.I.O.L.", but it was with 2001's "Tara" that the band truly arrived. The album reached top lists of countless magazines worldwide. Years, however, would pass before any new material would be recorded. In late 2007, the band finally announced its re-awakening. The band would take nearly sixteen months writing/recording its sixth album, "Absu", which was released early 2009. The second installment of what was meant to be a trilogy, "Abzu", arrived in 2011.

After meager deliberation and zero remorse, I have decided to dissolve ABSU...