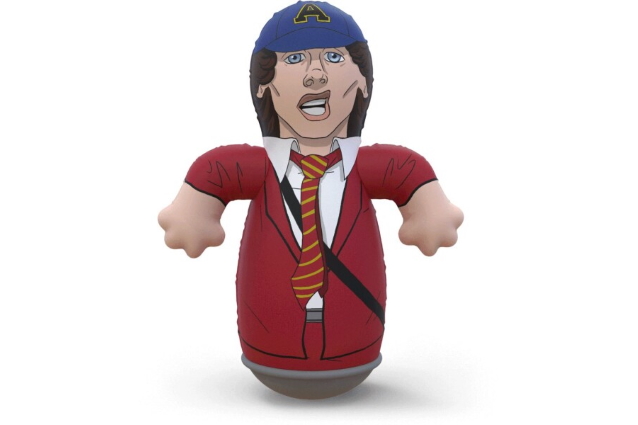 If your favorite mode of transportation is the Highway To Hell, you're in for a treat. Blown Ups! is ready to add some high-voltage rock 'n' roll to your collection with the release of an Angus Young figure. The AC/DC lead guitarist and co-founder is rocking on his guitar as an officially licensed Blown Ups! musician.

Standing approximately six inches, these figures have a weighted design, making them fun to flick and spin. They'll just wobble around — unless you choose to throw a knock-out punch.

With an iconic bop bag shape, Blown Ups! appear to be inflatable, but the patented valve design is just for show. They're actually made of hard vinyl and their arms rotate 360 degrees for added entertainment.

Earlier this year, Angus spoke to Germany's Guitar magazine about his early musical influences. He said: "I could play guitar a little bit, but I really got focused on it around the years when I was about 12 into my teenage years, I started to focus more on it. And around when I was about 13 [or] 14, that's when Jimi Hendrix appeared on the horizon. And when I first heard the song 'Purple Haze', I was totally enthralled: 'How's he doing that?' I was just so impressed with it. Plus, Malcolm, my brother, there was a few shows we had also seen. We had gone, the two of us together, and we had seen people like the band THE YARDBIRDS; they had come to Australia. And at the time, the lineup had just changed. I think they originally used to have Jeff Beck. But then, later on, when we saw them, they didn't have Jeff Beck; they had Jimmy Page on guitar. So that was good, because at that time, that kind of sound, especially for guitar, it jumped out at you, the sound of it. So that was really good. But then when along came Hendrix, you kind of went, 'Woah! This is another level on guitar.' So I was very much a fan of that."

AC/DC's latest album "Power Up", was released in November 2020. The LP features AC/DC's current lineup of Brian Johnson (vocals),Phil Rudd (drums),Cliff Williams (bass),Angus Young (guitar) and Stevie Young (guitar). It was recorded over a six-week period in August and September 2018 at Warehouse Studios in Vancouver with producer Brendan O'Brien, who also worked 2008's "Black Ice" and 2014's "Rock Or Bust".