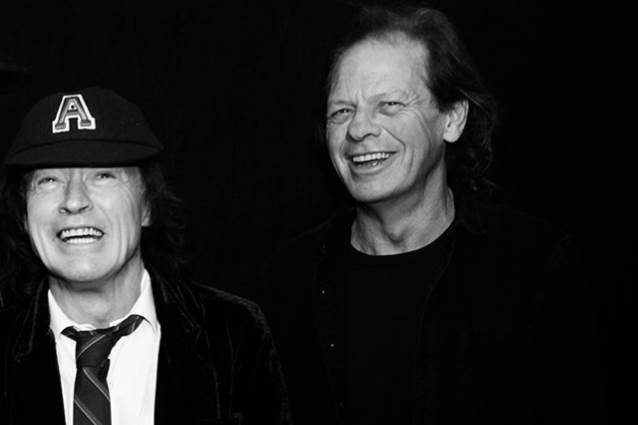 A day after a photograph of longtime AC/DC members Brian Johnson and Phil Rudd was posted online, purportedly taken outside Vancouver's Warehouse Studios — where the band's last three albums were recorded — a picture of Stevie and Angus Younghas emerged, apparently showing the pair at the same location.

Like the first photo, the new picture was taken by hardcore AC/DC fan Crystal Lambert, who has an apartment located near the studio, and shows Angus and Stevie having a cigarette.

Canadian journalist Steve Newton, who broke the news of AC/DC's presence at the studio, writes in his latest blog that there might not be any newer photos to come, because word got out that the legendary rockers were being spied on, and now there's a big umbrella on the deck blocking the sight of any of them hanging out.

The Warehouse has been AC/DC's studio of choice for the band's last three albums: 2000's "Stiff Upper Lip", 2008's "Black Ice" and the aforementioned "Rock Or Bust".

Angus Young and Stevie Young spotted. And then there was one...https://t.co/lvns4oHpQNhttps://t.co/RoVFF7WZiP#ACDCpic.twitter.com/Y4egHYragp