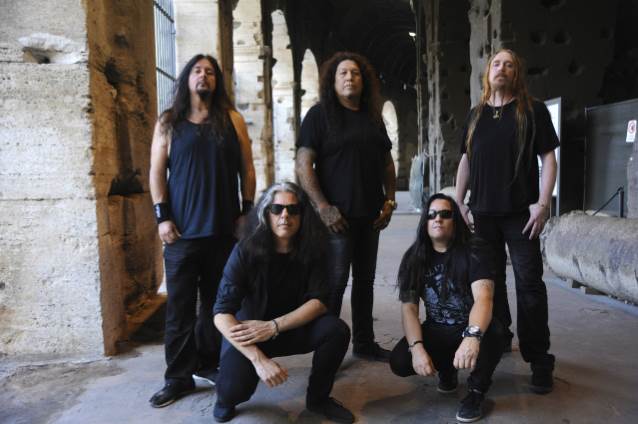 TESTAMENT Frontman: 'It's Time To Buckle Down And Try To Get Some Music Written'

TESTAMENT frontman Chuck Billy spoke to "Talking Metal" about the progress of the songwriting sessions for the follow-up to 2016's "Brotherhood Of The Snake" album. "There's no lyrics, but I'm sure Eric's [Peterson, guitar] got riffs going, and so does Alex [Skolnick, guitar]," he said (hear audio below). "After the SLAYER tour, we're not taking any more tours. It's that time to buckle down and try to get some music written. Our hopes and dreams would be to get in the studio by January and have an album out by the summer; that would be our ultimate dream. But we'll see what happens. It's tough making promises, 'cause you never know what's gonna happen."

According to Chuck, TESTAMENT's songs are "sometimes" finished in the studio while others are worked out beforehand. "It all depends how much those guys have worked on it," he said. "But a lot of the times, Alex has brought completed demoed songs. So it all depends. I mean, last [album], Alex didn't contribute as much to the record. But it's wide open this year."

Billy also confirmed that TESTAMENT is planning to use British metal producer Andy Sneap (JUDAS PRIEST, ACCEPT, ARCH ENEMY, SAXON, MEGADETH) once again to mix the upcoming album. "There's always that thought and talk [about going to someone else], but at the end of the day, we always go, 'You know what? I don't see anything wrong with what Andy did. So let's continue on,'" he explained. "Like they say, you don't mess with it if it ain't broke."

He added: "[Andy's] got a good grip on our sound and we work well together. At this point, unless we had issues, there's really no reason to try to go somewhere else. So I don't see it yet."

"Brotherhood Of The Snake" was recorded under the watchful eyes of producer Juan Urteaga (EXODUS, HEATHEN, MACHINE HEAD),Peterson and Billy and was mixed and mastered by Sneap.