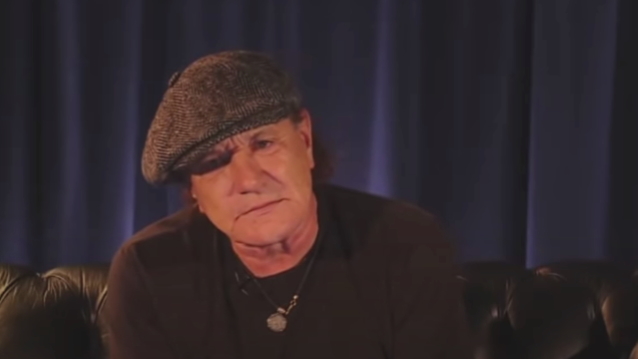 In a new interview with STEREOPHONICS' Kelly Jones for Radio X, AC/DC frontman Brian Johnson confirmed that the band's long-awaited comeback album, "Power Up", is a tribute to founding AC/DC rhythm guitarist Malcolm Young, who died in 2017 from effects of dementia at age 64. Malcolm is credited as a writer on all 12 tracks on "Power Up", along with his brother, AC/DC lead guitarist Angus Young.

"This whole album really is dedicated to Malcolm," Brian said (see video below). "He was everywhere in the studio. And I'm not being a softie, 'cause I'm not a believer in that kind of stuff, but boy oh boy, Malcolm was everywhere. And I know Angus felt the loss of Malcolm a lot more than he would usually let on. And Malcolm had written half these songs with Angus years before. He always had a box of songs. He was meticulous, Malcolm. Every time him and Angus put something down, he'd date it and catalog it. And he wouldn't forget a thing. And that's when Angus said, 'Well, let's do some of these things.'"

Johnson also discussed the "Power Up" track "Through The Mists Of Time", which has been described in one review as "the closest thing we'll get to AC/DC reflecting on the ever-present face of old father time."

"The riff for 'Through The Mists Of Time' came out, and Angus wrote the lyrics for that song, and I believe he captured everything — about the early days when the band started, when rock and roll was just carefree, when nobody gave a flying thought about anything except just having a good time and playing," Brian said. "And all this lovely innocence was gone. And I think [the lyrics] encapsulated [the sentiment]. To tell you the truth, every time I hear it, I still get a goosebump, and it's a tribute to Malcolm: 'Through The Mists Of Time'. And it's different. I don't know if it's different from anything we've done before, but it certainly stands apart."

Johnson went on to say that he was thrilled with the entire collection of material on "Power Up".

"I've got about — Jeez, I don't know how many favorites I've got on this album, 'cause they're all really cracking songs," he said. "I think you can tell the joy in the recording of it."