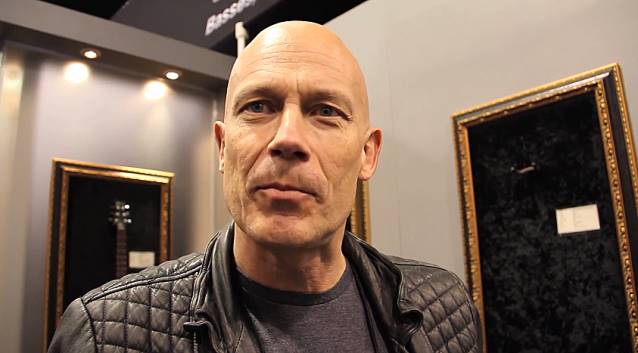 ACCEPT's WOLF HOFFMANN: 'I Honestly Think The Best Is Yet To Come'

Johan Jakobsson of UNT.se recently conducted an interview with guitarist Wolf Hoffmann of German/American metallers ACCEPT. A couple of excerpts from the chat follow below.

Wolf: This is, like, a project that took us almost a year and so much went into it, there's no way to describe that sort of thing in one word. It just feels right to me, but I don't know. I'm so fresh coming out of this thing I can't even describe it. We've been in this position many times in our career; you work so hard on something and you release it and you have no idea if it's gonna be good or bad. I have a better feeling now, I think I've been doing this long enough where I can say to myself, "I'm pretty certain this is gonna be a good one." I feel really strong about it, but at the end of the day, I have no idea. It's up to the fans to really decide how much they like something and how much they don't. I'm just the cook! Other people have to eat the food and tell me if it's any good. To me this one feels stronger than the last one but I've been wrong before. I'll let the fans decide.

UNT.se: How do you go about writing songs?

Wolf: A lot of it is riff based; it starts with a groove and a riff that we really like and we feel like oh, this has got a good feel to it and we feel like, this really feels like it can go somewhere. Some riffs, like "200 Years", or for instance "Dying Breed", from the get-go had a really solid old-school ACCEPT feel to them. A lot of times it starts with a riff. We spend the most time trying to get to the core of the song, the chorus idea, that's usually the hardest. Once we got a good chorus idea and hooklines, then you're almost halfway home. The rest is just fun stuff. The hard part is really coming up with a good chorus and a good strong overall core of the song. Anybody can shred and make a lot of noise for three minutes, but is it really anything that is memorable and something that people can latch on for the first time listening?

UNT.se: There are songs on this album that are quite similar to those on the last couple of albums.

Wolf: That's what we try to do. Better without being different necessarily. You can't always get into new territory because then people are gonna say it doesn't sound like ACCEPT. So you want it to sound like ACCEPT but you don't want it to be something that's so reminiscent of something you've already done that people are gonna say it's the same old, same old. It's got to have enough fresh stuff in it, but not too much. You can ask any band that's released that many records, at a certain point it gets tougher and tougher. That is probably the main reason why bands take longer and longer between albums. Why is it that in the '80s people is used to make two records a year and now they make one every seven years? Because they have pretty much come to the point, I think, where it gets so hard to come up with something that's relevant.

Wolf: Yeah, I think honestly the best is yet to come; we have the best part ahead of us because all this feels like a fresh start. We're just getting started! Imagine all this five years ago, all of us were doing something completely different then. Peter [Baltes, bass] was doing his radio stuff, I was a photographer, Mark [Tornillo, vocals] was an electrician in New Jersey. We didn't think anything like this would happen again. We all grew up with '80s metal and loved what we were doing, but pretty much it was all behind us. All of a sudden this idea was created out of nothing. Why don't we start ACCEPT with Mark because there he is? He just walked into our lives and we didn't have a label, we didn't have a tour, we had nothing. We didn't even have a band; we just called the other guys because they were the natural choice. We didn't have a machine behind us, no publicist, no nothing and here we are four years later, three albums under our belt, we've toured the world. Who would have thought? It's a miracle story, it changed all our lives. It changed my life.

Read the entire interview at UNT.se.