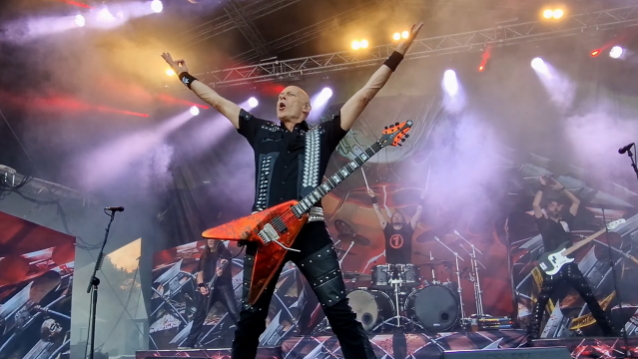 ACCEPT's WOLF HOFFMANN Says He Was Dragging His Feet During Pandemic: 'It's Been Such A Weird Time'

In a new interview with Robert Cavuoto of Sonic Perspectives, ACCEPT guitarist Wolf Hoffmann was asked if he and his bandmates will enter the studio after their upcoming U.S. tour to begin work on a new album. He responded (as transcribed by BLABBERMOUTH.NET): "Well, the studio is basically my house, or the band house, in Nashville. But, yeah, I will go there and definitely start working seriously on songs. We're not quite ready to record because, quite honestly, we don't have finished songs yet. I've got a collection of stuff that I started to put together but it's at the very beginning stages. But, yeah, we wanna put out a new album as soon as we can, sure."

He continued: "I've also been dragging my feet quite a bit because it's been such a weird time with corona. You would think I had all this free time so I have dozens and dozens of songs ready to go, but the truth is I don't. I was sitting here basically like you sit at the airport. You get there, you wait for your flight, and 10 minutes before it's ready to take off, they tell you, 'Oh, there's an hour delay.' And you think, like, 'Okay. An hour, that's not so bad. There's not much time to do much anyhow, so let me just sit here and wait.' And then, when that hour is over, they tell you, 'Oh, by the way, it's gonna be another two hours.' Had you known all this upfront, you would have probably done something useful. But it was almost like 'hurry up and wait.' And that's how it felt, to me, with corona. And I thought, 'Well, in a couple of months the tour is gonna go on anyhow. So I'm not quite ready to work on new songs quite yet.' But had I known it was gonna be a long two-year break, I might have gotten my act together and jumped into it. And we had just done an album during corona, so we were arranging to tour with it and not start working on new songs already. Because I felt like, 'Hey, I just made a record. Give me a break, people. I wanna tour this album first. I don't really wanna work on another album.' And also I don't know that the world was ready for yet another album. I mean, come on."