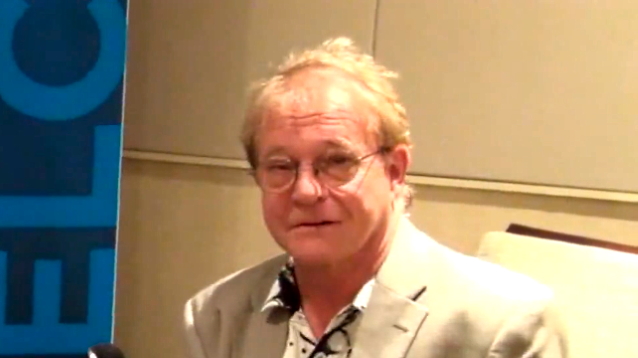 Acclaimed Producer KEITH OLSEN, Who Has Worked With OZZY OSBOURNE, WHITESNAKE And SCORPIONS, Has Died

Acclaimed American producer Keith Olsen, who has worked with such artists as OZZY OSBOURNE, WHITESNAKE, SCORPIONS and WARRANT, has passed away.

Olsen's death was confirmed by SCORPIONS, who wrote on their Facebook page earlier today (Monday, March 9): "We just learned about the passing of our dear friend and producer Keith Olsen. Keith produced many iconic albums, including our album 'Crazy World'. Keith was a wonderful guy, and the making of 'Crazy World' was such an inspiring journey, containing outstanding songs like 'Wind Of Change' and 'Send Me An Angel', which had the Keith Olsen touch, on every single note. Our hearts and prayers go out to his family. RIP, Keith. You live on in the music."

According to Wikipedia, Olsen was born in Sioux Falls, South Dakota and went to school in Minneapolis, where he developed an appreciation for classical, pop, and jazz music. He gained production experience working in recording studios in the Minneapolis area, and musical and touring experience playing upright bass in jazz and folk bands. He subsequently played bass as a member of the MUSIC MACHINE, which had a hit with the single "Talk Talk". During this time he began collaborating with Curt Boettcher, producer of THE ASSOCIATION's single "Cherish", and met another early influence, Brian Wilson of THE BEACH BOYS, who taught him "to envision everything about a production as you hear the song the first time."

After moving to Los Angeles, he was instrumental in launching the careers of Lindsey Buckingham and Stevie Nicks. He helped them to secure a record deal, produced their first album, "Buckingham Nicks", and let them live in his house, employing Nicks as a housekeeper for a while. After introducing them to Mick Fleetwood, he went on to produce FLEETWOOD MAC's eponymous 1975 album, which reached No. 1 in the U.S.

Through the 1970s, 1980s, and 1990s, Olsen earned more than 39 gold, 24 platinum, and 14 multi-platinum album certifications as the producer on over 100 albums, including BAD COMPANY, EUROPE, 38 SPECIAL, SAMMY HAGAR, FOREIGNER, JOURNEY, LOVERBOY and LOU GRAMM. He was also involved in several movie soundtracks, including "Footloose", "Vision Quest", "Tron", "Flashdance" and "Top Gun".

We just learned about the passing of our dear friend and producer Keith Olsen ....
Keith produced many iconic albums,...