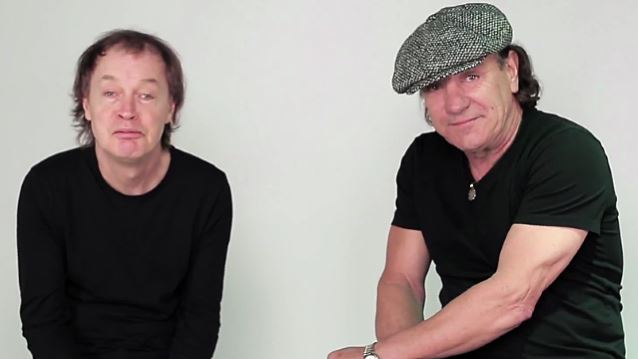 AC/DC Shoots Down Report That 'Rock Or Bust' Was Made In Just Ten Days: 'Impossible,' Says BRIAN JOHNSON

AC/DC has shot down reports that the band's new album, "Rock Or Bust", was recorded in just ten days, with singer Brian Johnson calling the prospect of laying down all the tracks for the CD in less than two weeks "impossible."

The idea that AC/DC blazed through the production process for "Rock Or Bust" at a Vancouver studio with producer Brendan O'Brien first came to light in August when some music news sites erroneously quoted AC/DC drummer Phil Rudd as saying that the album was recorded in ten days, he actually told Australian radio station Triple M that he was done with his drum parts in that time, adding, "I've never played better."

Asked about reports that AC/DC spent just ten days making "Rock Or Bust", Johnson told Ultimate Classic Rock (see video below): "No, no. It's impossible. You've got four or five days of getting the sound right — at least. But it was very rapid; don't get me wrong. It was like four to four and a half weeks in the studio. And after that [guitarist] Angus [Young] went with Brendan and did some more work on figuring which was best — 'keep in and keep out' type of thing. So that takes a bit longer, but that just goes with the territory; that's part of the thing as well."

Rudd in August said that AC/DC's new album is better than its predecessor, 2008's "Black Ice", even though founding guitarist Malcolm Young was not present for the sessions. In an interview with Australian radio station Triple M, Rudd called the record "stellar," adding, "I hope it's as good as I remember when I came away from the studio. It's pretty damn good."

AC/DC last week unveiled the full music video for "Play Ball", the first single from "Rock Or Bust". The clip marks the first official time that guitarist Stevie Young has appeared in a video with the group, and is also notable for the absence of Phil Rudd, who is replaced in the clip by Bob Richards.

Malcolm Young stepped down from the group earlier this year after it was revealed he was suffering from dementia. Stevie, the nephew of Malcolm and guitarist Angus Young, played on "Rock Or Bust" and will be in the touring lineup.

Rudd has been under fire since earlier in the month when it was initially reported that he was arrested in an alleged murder-for-hire plot. Those charges were eventually dropped, but he's still facing charges of "threatening to kill" as well as possession of meth and marijuana. He could end up sentenced to seven years in jail.

AC/DC has already stated that the drummer's troubles will not affect next year's world tour or the December 2 release of "Rock Or Bust".