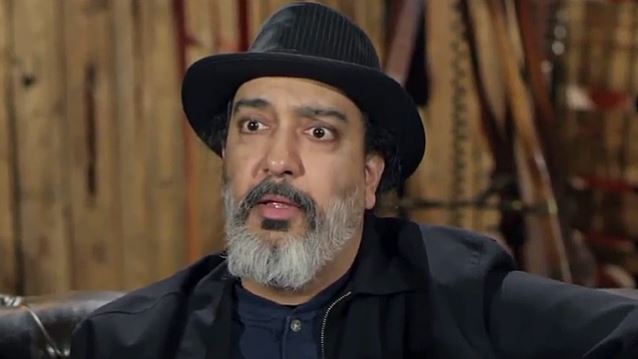 SOUNDGARDEN has already released a deluxe 20th anniversary reissue of its 1994 album, "Superunknown", this year and has a three-CD collection of B-sides and rarities called "Echo Of Miles: Scattered Tracks Across The Path" on tap for next week. But the band isn't done restoring its old catalog yet. Guitarist Kim Thayil told The Pulse Of Radio that he and famed Seattle producer Jack Endino recently turned their attention to the band's first album, 1988's "Ultramega OK". "Last year, Jack Endino and I spent a number of weeks remixing 'Ultramega OK' and we're gonna search for a label — it's no longer on SST — and put it out with a beautiful, heavier, warmer mix from Jack Endino, which is something we always felt we had to correct about that release," he said.

"Echo Of Miles: Scattered Tracks Across The Path" will contain seven never-before-released songs, including the newly recorded track "Storm", along with original B-sides, instrumentals, covers and demos recorded throughout the band's career.

The first disc is subtitled "Originals" and will feature SOUNDGARDEN-written B-sides plus the previously unreleased "Storm" and "Kristi".

"Covers" is the theme of disc two, featuring SOUNDGARDEN takes on songs by THE BEATLES, BLACK SABBATH, THE ROLLING STONES, DEVO and others. while disc three is called "Oddities" and includes an assortment of instrumentals, remixes and demos.

SOUNDGARDEN plans to work on a new studio album sometime in 2015.