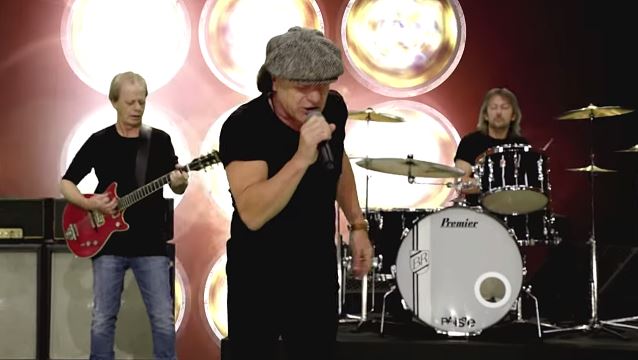 Welsh drummer Bob Richards spoke to U.K.'s Rhythm magazine about his recent experience filling in for AC/DC's Phil Rudd during the filming of the videos for "Play Ball" and "Rock Or Bust", the first two singles from the band's latest album, "Rock Or Bust".

Rudd was arrested last November at his home in Tauranga, New Zealand on charges of threatening to kill and possession of methamphetamine and cannabis.

Richards, who previously played with ASIA and Graham Bonnet, was contacted in early October and asked if he could make his way down to London for the video shoot.

"I received a call on the Thursday evening asking if I could step in as Phil was unavailable, so I filled in at the last minute," Richards told Rhythm. "It was all hands on deck. I got my kit sorted out and then an early start to London."

He continued: "I heard the songs an hour or so before we went on to the set to start the filming. I played it over several times and did a bit of air drumming to it.

"The band were fantastic. They made me so welcome and we had a great time shooting the videos. They were very encouraging. I could just enjoy the experience.

"Brian [Johnson, vocals] invited myself and some of the crew out for a few drinks in the evening. He's a great host."

Playing with AC/DC was a dream come true for Richards, who revealed that he "first saw AC/DC at the second Monsters Of Rock at Castle Donington in 1981 and several more times after that." He added: "They're a fantastic live band and Phil is so disciplined. He has the knack of playing the correct parts for the song and has a great feel to his playing."

Rudd will stand trial beginning on April 21 in New Zealand's Tauranga District Court, according to the AFP. Rudd was originally scheduled to go to trial on February 10 but the date was moved after his lawyer unexpectedly quit the case by what was said to be mutual agreement.

Although Rudd played on "Rock Or Bust", he did not appear in photos for the disc.