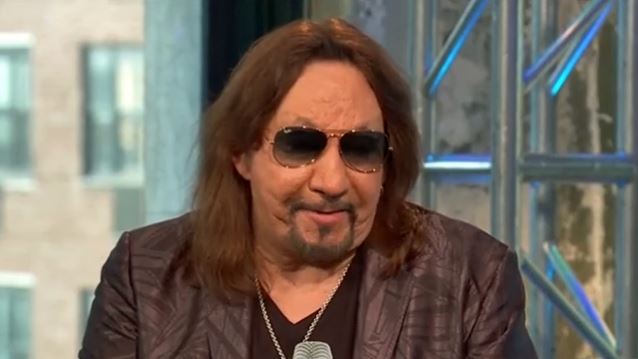 ACE FREHLEY: KISS Reunion 'Would Be Magical If It Was Handled Right'

Original KISS guitarist Ace Frehley took part in a live interview event with BackStory on March 23 at AOL studios in New York City. The interview was conducted by Brad Tolinski. Best known as the editor in chief of Guitar World magazine for 25 years, Tolinski is a respected journalist and the author of "Light And Shade: Conversations With Jimmy Page". You can now watch video footage of the question-and-answer session below. A couple of excerpts from the chat follow below (transcribed by BLABBERMOUTH.NET).

On the advances in recording technology and switch from analog to digital recording:

Ace: "When I listen to the first and second KISS record, they're so dry… there's no digital reverb. The production is just… Sometimes I cringe [when I hear it]. But, to me, the biggest advantage of what's happening now when you record is digital. I mean, the flexibility you have with digital editing and digital recording… I mean, I come from the school in the '70s, when we had to make an edit, we had to cut it with a razorblade. It was a two-inch piece of tape, and we had to cut it. And I remember, a lot of times, they took little slices of tape and put it off to the side and put it back together, and we'd play it and go, 'Hey, it doesn't sound right. Put that piece back in.' And sometimes it took an hour just to do an edit. But with digital editing, it's a click of the mouse."

On whether he felt KISS's extremely robust merchandising efforts ever got out of control during his time with the band:

Ace: "I talk about that in my book [2011's 'No Regrets: A Rock 'N' Roll Memoir'], and I was very explicit. What happened was, once we… Well, I shouldn't say 'we'… Gene [Simmons, KISS bassist/vocalist] got out of control with the merchandising. You know, the lunch boxes… whatever. Kids started coming to the concerts… We started out almost like an underground band, and then, obviously, our following grew. But we started appealing to younger kids, because of all the toys and whatever the case… We did that silly movie, 'Kiss Meets The Phantom Of The Park'. [Laughs] And Paul [Stanley, KISS guitarist/vocalist] and Gene get upset about that; I just think it's a riot. I had so much fun doing that. We'd get to a sold-out show, and there'd be people there with their kids, five-year-old kids, and my manager would say to me, 'Ace, cool it with the cursing tonight, because you've got young kids in the front row, and you don't wanna say 'fuck.'' So that was kind of the beginning of [me] realizing ,'Maybe we've become a little too commercialized.'"

On whether Stanley and Simmons ever acknowledged the fact that he was the "coolest" member of KISS:

Ace: "They never acknowledged it. Many times they didn't think I was cool, because maybe I didn't show up or I was late or I was too loaded. But it went along with the territory those days. I wouldn't do anything any differently than I did. It was a learning experience for me. This September, it'll be ten years sober. So it's, like, I really feel I needed to go through that nonsense to get to where I am today. But I got cool from being in the streets. I grew up in the streets; I was in street gangs. I used to set up my friends with dates, and that's how I got the nickname 'Ace.' I mean, it's just a lot of things. The way I carried myself… I don't know. I think you're either born with it or you're not."

On whether he thinks there will ever be another reunion fof KISS's original lineup:

Ace: "I don't know. I mean, I always leave the door open. I'm the kind of guy that says, 'Never say never.' I know those guys are always saying I don't deserve to wear the makeup, and 'We'll never work with Ace again.' But, you know, they said that before the reunion tour in '96. So who knows? It hasn't been discussed, if that's what you wanna know. It hasn't been discussed. And who knows what the future will bring? If it did happen at some point, I think'd be magical if it was handled right."