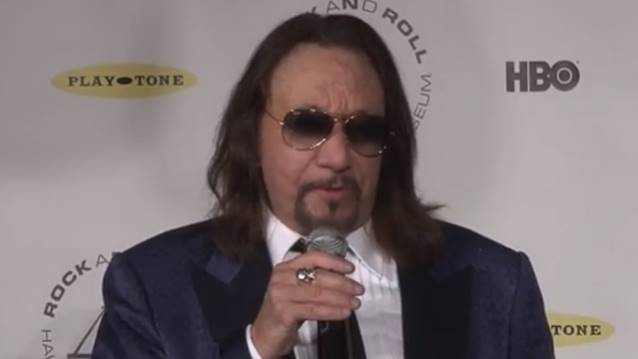 ACE FREHLEY On Seeing PAUL STANLEY And GENE SIMMONS Again: 'It Felt Like I Just Saw Those Guys Yesterday'

Original KISS guitarist Ace Frehley spoke to RollingStone.com about the band's induction into the Rock And Roll Hall Of Fame following last night's (Thursday, April 10) ceremony at Brooklyn's Barclays Center. Asked how it felt to get up there with is former bandmates again after all the controversies leading up to the induction, Frehley said: "It felt like I just saw those guys yesterday. We're brothers in rock and roll. The press seems to amplify the fact that we hate each other, and we really don't. We've had our differences over the years, but every rock and roll band does. Tonight, it felt like I had just left those guys the other day, and they were very gracious considering what we've been creating over the last 40 years."

Regarding how he left it off with Gene Simmons and Paul Stanley — both of whom have had some harsh words for Frehley and original KISS drummer Peter Criss in recent years, Frehley said: "They were congratulating me on the stage. But I had gotten calls from them a couple months ago when this first went down. We created something that no one can take away from any of us, and it withstood the test of time."

Asked what he is proudest of when he looks back at those 40 years, Frehley said: "I think we're probably gonna go down in history as the greatest theatrical rock group in the world. I think that's probably gonna be an undisputable fact. And now that we're part of the Rock And Roll Hall Of Fame, that just cements our place in history even better. And the cover on the Rolling Stone. [Laughs]"

KISS did not perform at last night's event. The Hall Of Fame wanted the original quartet only to play, while Simmons and Stanley insisted on the current lineup performing as well. In the end nobody won that battle.

The 29th annual Rock And Roll Hall Of Fame induction ceremony was taped and will air on May 31 on HBO.

Paul Stanley told The Pulse Of Radio that he wanted KISS' greatest work to contain everything that he loved and admired about his favorite records growing up. "I'd like to think that the bands that you are influenced and inspired by doesn't necessarily mean that you mimic them," he said. "It means that their passion, or their approach is inspirational. So, whether its gospel, or Motown — it all is music of passion. And that's what I think we wanted to and I wanted to see us channel was the passion and the fervor that all the music I loved had. Y'know, its not about perfection — it's about passion."

Despite their hard rocking image, Gene Simmons and Paul Stanley never succumbed to the pitfalls of drugs and alcohol. Over the years, Simmons has never hidden his feelings about drug use, even when his bandmates were involved. He told The Pulse Of Radio that drugs are the number one reason for bands failing to live up to their potential. "I have no sympathy at all for anybody that doesn't have enough self-respect for themselves and for their bandmates, because when one guy decides that his dalliances with crazy things is more important that the welfare of his band, that guy doesn't deserve any success," he said. "Because a team is a team, and every guy's gotta carry the weight. You're only as good as your teammates."