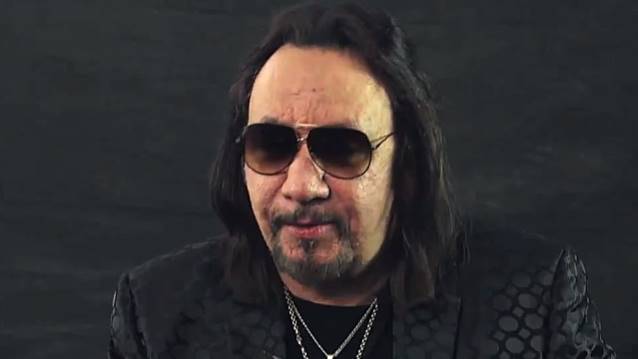 Original KISS guitarist Ace Frehley spoke to Ultimate Classic Rock about the band's April 10 induction into the Rock And Roll Hall Of Fame. You can now watch the chat below.

Frehley told ABC News Radio that he was "really honored" to be part of the ceremony, but added: "I really didn't like some of the things Paul Stanley said in his speech, because obviously he's a little aggravated with the Rock And Roll Hall Of Fame. I know he wanted to get other members in the group inducted."

Ace revealed that "there was some political stuff going on" over whether KISS would perform at the event. "Unfortunately we did not perform, even though I was up for it," he said.

"I try to stay away from politics," he added. "I don't think politics and music work. I never did."

Frehley was also full of praise for RAGE AGAINST THE MACHINE guitarist Tom Morello's introduction speech, calling it "[the] best introduction KISS has ever gotten from anyone, bar none, over the 40-year career." He added: "I know Tom, and we spoke a few times before, but I didn't expect something that elaborate and that insane… It was wonderful and I thanked him wholeheartedly after, back behind the stage."

Although Frehley was supposed to participate in the traditional all-star jam that usually takes place at the end of the Rock Hall ceremony, the performance was canceled because the event ran long. The track Frehley would have played on was AC/DC's "Highway To Hell", which was chosen because Bruce Springsteen — who was at the Rock Hall to induct his E STREET BAND — had been playing it at some of his recent tour dates.

"It was nice because Tom Morello called me up and… gave me the link to YouTube and he goes, 'This is the arrangement. This is the key,'" Frehley told ABC News Radio. "So I learned it. It took me about 10 minutes, and I said, 'OK, I'm ready to go.' And then, right before NIRVANA came on, I get the word that [the song was cut]."