Founding KISS guitarist and Rock And Roll Hall Of Fame inductee Ace Frehley has announced the "Space Truckin'" picture disc EP, a title exclusive to Record Store Day on November 27, in the form of a 12-inch vinyl picture disc for his single "Space Truckin'", a cover of the DEEP PURPLE classic. The limited-edition vinyl release also features additional bonus tracks such as "Mission To Mars" and "The Return Of Space Bear". To celebrate the announcement, Ace has shared an extended double music video for "Mission On Mars" and "Space Truckin'".

"Space Truckin'" is taken from Frehley's newest album, "Origins Vol. 2", out now via Entertainment One (eOne),which continues Ace's reflections on a lifetime in music and inspiration. No stranger to cover versions throughout his musical history — having recorded, rebranded and repossessed such notable nuggets as "New York Groove", "Do Ya" and "I Wanna Go Back" throughout his eight previous studio efforts — this new collection presents a thoughtful and exciting selection of songs that inspired and helped shape the legendary guitarist. That spirit of fun is carried through with exquisite execution, and guitar aficionados will enjoy Frehley's fresh interpretations of these classic songs.

"Space Truckin'" was recorded at The Creation Lab in Turlock, California with drummer Matt Starr and keyboard player Rob Sabino.

"'Space Truckin' was recorded years ago, and then I just re-recorded some parts and changed it a little," Frehley said in a statement. "We never ended up putting it on a record, so it was just sitting around. It turned out very well. Rob Sabino is a very accomplished studio musician, and we actually grew up in the Bronx together, so we go way back."

KISS did not perform — the Hall Of Fame wanted the original quartet only to play, while Simmons and Stanley insisted on the current lineup — which also includes guitarist Tommy Thayer and drummer Eric Singer — performing as well. In the end nobody won that battle. 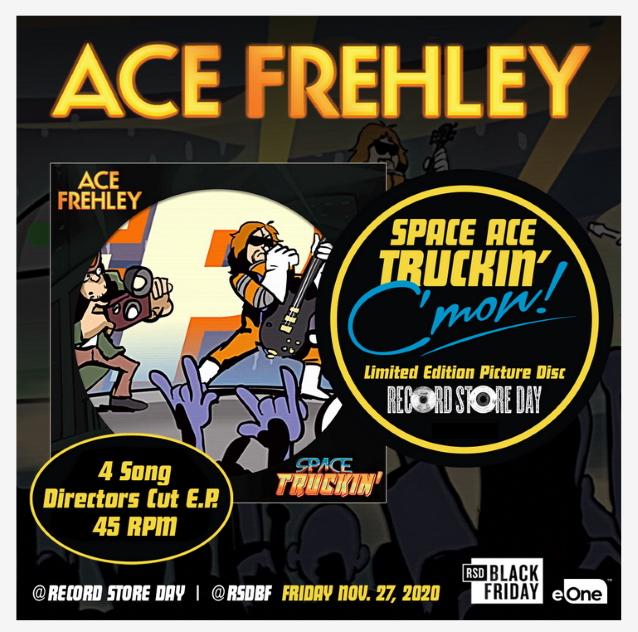