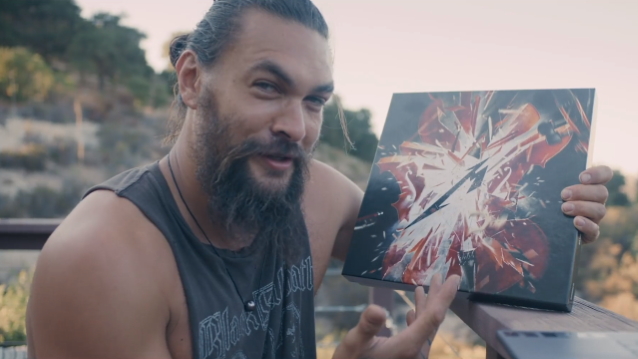 Jason Momoa, the hulking star of the superhero film "Aquaman" and diehard metalhead, got his hands on an early copy of the upcoming "Metallica And San Francisco Symphony: S&M²" release. His short video review of the set can be seen below.

The Hawaiian-born actor, who is perhaps best-known for his role as Khal Drogo in HBO fantasy epic "Game Of Thrones", is a huge heavy metal fan, having previously said that he listened to a lot of PANTERA, METALLICA and MUDVAYNE to get himself into the right frame of mind for playing a warrior like Conan in Marcus Nispel's remake of the classic Arnold Schwarzenegger action adventure "Conan The Barbarian". More recently, he tapped vocalist Oli Peters of the Canadian death metal band ARCHSPIRE to coach him on how to mimic his distinct vocal style for the early troop rallying scene in the Apple TV+ sci-fi series "See".

The "S&M²" concerts were historic on multiple levels: They served as the grand opening of San Francisco's Chase Center, reunited the band and Symphony for the first time since the 1999 performances captured on the Grammy-winning "S&M" album, and featured the first-ever symphonic renditions of songs written and released since those original "S&M" shows.

"Metallica And San Francisco Symphony: S&M²". "S&M²" will be available in a staggering array of formats, ranging from a digital album on all leading streaming outlets, to 4LP vinyl, 2CD, DVD and Blu-ray versions, to a limited edition color vinyl 4LP + 2CD + Blu-ray Deluxe Box featuring sheet music, guitar picks, poster and more, all the way up to a Metallica.com exclusive Super Deluxe Box, limited to 500 copies, each featuring actual sheet music used by the Symphony during the shows and hand-signed by all four band members (in addition to including everything in the Deluxe Box). With this long-awaited Blackened Recordings release, "S&M²" can be fully experienced by others beyond those who squeezed into the Chase Center over those two unforgettable evenings.

Glad you diggit, bro! We hope everyone out there digs it too!